During the landing at Villahermosa-Capitan Carlos Perez Airport (VSA/MMVA), a helicopter belonging to the Mexican Navy, suffered an accident in which the tail boom was severed, leaving at least three people with multiple minor injuries.

The details were given in a 17 October media release by the Mexican Navy Secretariat, to announce that five of the eight people on board were injured.

In a statement presented by the Mexican Navy Secretariat said the injured were in stable condition for non-life threatening injuries ranging from minor abrasions and lacerations to fractures.

The incident occurred during the taxiing of the helicopter (taxiing along the runway) during landing, after the crew returned from a reconnaissance flight in the area due to heavy rains.

The Navy helicopter crashed into a control tower in the airport’s landing zone, while rolling down the runway. The accident occurred at 9:38 am. 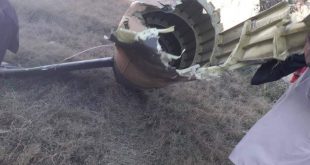