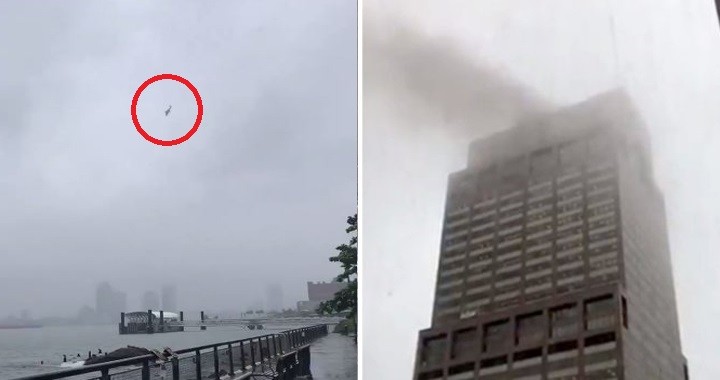 A pilot is dead after a helicopter crashed on to the roof of a building in Manhattan on Monday, the New York Fire Department confirmed to the Associated Press.

The pilot has been identified as Tim McCormack, a veteran aviator. An investigation is underway.

It occurred on a rainy and foggy afternoon at 787 Seventh Avenue, just north of Times Square.

The twin-engine Agusta A109E, carrying only the pilot, had taken off from a heliport on Manhattan’s east side at 13:32 local time. It was reportedly heading to Linden Airport in New Jersey.

Eleven minutes later it plunged into the top of the 54-storey office building, in what was described as a forced or emergency landing.

Eyewitnesses said the building shook with the impact and they were reminded of the plane attacks on the city in September 2001.

The airport manager, Paul Dudley, said that McCormack was highly trained and experienced, with intimate experience with the area. Dudley believes that McCormack chose to go to the roof of 787 Seventh Avenue to spare people on the ground.

Police Commissioner James O’Neill said the chopper was airborne for about 11 minutes before crashing. According to law enforcement sources, the aircraft could be seen flying erratically in the sky, making dramatic dips and turns before vanishing into the clouds.

Officials quickly ruled out any terrorist element to the crash.

National Transportation Safety Board officials will be looking into why the helicopter, which officials said was engaged in “executive travel”, was flying in such poor weather.

Police reported the incident happened 787 Seventh Ave, according to PIX 11. New York Gov. Andrew Cuomo was on the scene, and said that while a fire had broken out on the roof of the building, there were no reported injuries from workers inside. The fire has since been put out, and people evacuated buildings in the area, CBS New York reported.

NYPD tweeted out a warning to avoid the area of 51st and 7th Avenues, saying a police investigation was ongoing.

Here are some images and video from the scene.

787 7th ave, #midtown NYC. We’re 1 block south. 20 mins ago there was a loud sound like a too-low #helicopter & I looked up and saw sheet of flame on roof and then smoke. News reports saying helicopter/small plane crash onto roof which would be consistent with what I heard/saw. pic.twitter.com/swY3ksLskH

Images from the scene of today’s helicopter crash at 787 7th Ave. in Manhattan. #FDNY members remain on scene. There is one fatality reported. pic.twitter.com/7qyyJWrMsw