RAF Chinook suspected to have had a wire strike (overhead power lines), and force landed in a field near Llangynin, Carmarthenshire at 10:30pm local time on 28 July 2020.

The MoD said the incident happened on Tuesday evening near Llangynin, and the twin-engine aircraft crew suffered “minor injuries”.

A suspected “wire strike” is thought to be responsible for the heavy-lifting helicopter coming down in the area.

Military chiefs said the Chinook was on a training exercise at the time.

The helicopter’s crew have remained with the aircraft to maintain security until it can be recovered.

Repair and recovery efforts will take place on Wednesday after the helicopter sustained “minor damage”, the MoD said.

Nearby residents on social media reportedly described hearing the sound of a loud helicopter in difficulty.

Chinooks are primarily used for trooping, resupply and battlefield casualty evacuation, and can carry arms.

An RAF spokesperson told LBC News: “A Chinook from RAF Odiham on a routine training sortie was involved in an incident requiring it to make a landing in a field near Pembrey.

“There has been some minor damage to the aircraft and one of the crew has minor injuries due to some broken glass. The cause of the incident is under investigation.”

The Chinook is described as an extremely capable and highly versatile support helicopter that can be operated from land or sea bases into a range of diverse environments, from the Arctic to the desert or jungle.

It may be armed and is fitted with a suite of self-defense equipment, allowing it to operate across the battlespace. Chinooks are primarily used for trooping, resupply, and battlefield casualty evacuation. 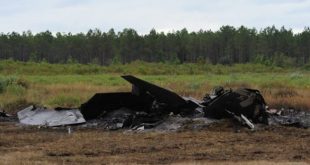