A Russian military transport plane An-12 had an accident during landing on the island of Iturup, part of the Kurils in the Russian Far East, because of a broken chassis, but nobody was injured, the regional military said Tuesday,

According to the press service of the Eastern Military District, the plane had been on a scheduled flight, which was carried out in difficult weather.

“Nobody is injured among the crew or the passengers,” the press service said, adding that the plane did not have any major damage. 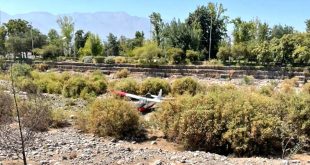