A Royal Netherlands Air Force Boeing CH-47 Chinook transport helicopter was damaged by a storm in the United States.

The helicopter was parked at Reading, Pennsylvania, during an intermediate stop. The rotor blades were tied down as a storm was approaching. One of the tie down lines was severed in the storm, causing damage to the forward rotor blades.

The aircraft made a scheduled stopover in Reading, Pennsylvania, to refuel. Due to approaching bad weather, it was decided to ground the helicopters and prepare them for severe weather.

For this, the rotor blades were secured with so-called tie-down lines. However, due to the storm’s severity, 1 of the lines has broken. This caused the wind to take hold of the rotor blades and damage

The damaged aircraft is now brought to its destination by ground.

The 2nd aircraft turned out to be undamaged and flew to its final destination. The precise damage and possible consequences for the modernization project are being investigated further. 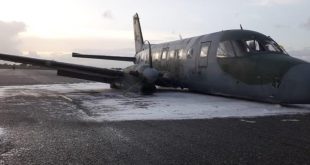 Credits: Iván Castro Palacios / Twitter on 21 May 2020, after suffering hydraulic failure, a …