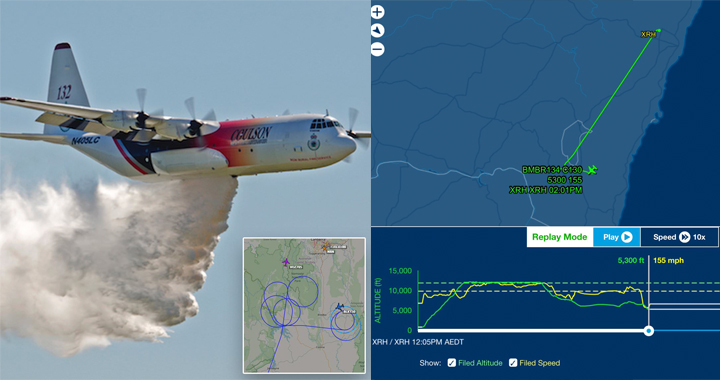 Earlier this afternoon, the NSW Rural Fire Service (RFS) said it had “lost contact” with a Lockheed C-130 Hercules being used in water bombing operations in the Snowy Monaro area.

Firefighters, emergency services and military personnel launched a search and rescue operation and located the wreckage.

However, RFS Commissioner Shane Fitzsimmons said all the crew members were “tragically” killed.

We hoped the worst was over, but tonight, we have a fresh tragedy to report from the state's bushfire zone.

A large air tanker, heading to the Snowy Mountains, has crashed – killing 3 people on board. #9News pic.twitter.com/hvarZdi4zi

“[The aircraft] impacted heavily with the ground and initial reports are that there was a large fireball associated with the impact of the plane as it hit the ground,” he said.

Commissioner Fitzsimmons said there was no indication on what caused the accident, but the Australian Transport Safety Bureau (ATSB) was working to determine what happened.

The company has grounded its Large Air Tankers fleet as a precaution and as “a mark of respect”. The grounding of the water bombers by Coulson Aviation will have an immediate impact on aerial firefighting capacity, Commissioner Fitzsimmons said, but he understood their decision.

The Australian Transport Safety Bureau will now forensically examine the crash, including the crash site and the debris, in a bid to determine how the plane went down.

The plane and bodies will be retrieved after the initial investigation, according to Mr Fitzsimmons.

The NSW Rural Fire Service is investigating reports of a serious incident involving an aircraft in southern NSW this afternoon.
Contact was lost with a Large Air Tanker which was working in the Snowy Monaro area. #nswrfs #nswfires pic.twitter.com/i6u1mlZsZ0

The C-130 Hercules Large Air Tanker is the largest aircraft in the RFS fleet with 15,000-litre capacity.