It was stated that there were no dead or injured in the incident.

Here are video of crash landing :

It had a forced landing in mountains near the Iraq-Turkey border in Diyarbakir.

Special Operations teams were sent to the region after the accident. In the written statement made by the Governorship of Bingöl, the following statements were made:

“Within the boundaries of Akpınar village, in the Genç district of Bingöl, due to the technical failure that occurred in the general purpose helicopter belonging to the Tunceli Gendarmerie District Command, which returned after receiving the teams in charge at the operation carried out by the Provincial Gendarmerie Command on Wednesday, July 8, 2020. There was no casualties and injuries in the 7 personnel and 3 crew members in the helicopter. 5 Gendarmerie Special Operations (JÖH) teams affiliated to the Bingöl Provincial Gendarmerie Command arrived in the region. “ 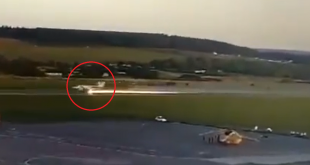