Upon landing, the landing gear of a Lockheed Martin F-35A Lightning II, operated by the 388th FW, collapsed. The pilot survived the crash.

The accident occurred at 10:45 a.m. local time. The pilot, part of the 388th Fighter Wing, was able to exit the aircraft and is undergoing a medical evaluation. Safety investigators will look into the incident, Hill Public Affairs Director Thomas Mullican said in an email.

“In response to the incident, the runway is currently closed and aircraft from Hill AFB in flight at the time of the incident have been diverted to other airports,” Mullican said. “Additional training flights have been paused until the runway reopens.”

A safety review board will investigate the incident, Hill said.

This is the second major F-35A mishap in a matter of weeks after one crashed at Eglin Air Force Base in Florida during landing following a routine training mission on May 20th, 2020. Like this latest incident, thankfully the pilot survived that one, as well.

Another F-35 suffered a gear malfunction after landing less than two years ago. That aircraft ended up with its nose on the tarmac at Eglin Air Force Base in Florida. 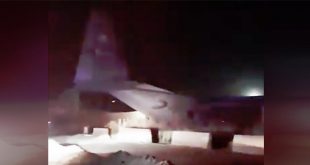