U.S. Navy T-6B Texan II turboprop trainer aircraft crashed in Alabama. The aircraft was destroyed impacting a house in Foley, Baldwin County, Alabama. Both pilots were fatally injured. There have been no reported injuries on the ground.

The crash occurred at about 5 p.m. local time in Foley, Alabama, a town near the Gulf Coast, according to a Naval Air Forces statement.

The identities of the deceased are being withheld for 24 hours, pending next-of-kin notification.

A U.S. Navy T-6B Texan II aircraft crashed in Foley, Alabama, at approximately 5 p.m. CST today. The aircrew did not survive the crash. We are not aware of any civilian casualties this time. The names of the deceased will not be released until 24 hours after the next-of-kin notification. The incident is currently under investigation. The Navy is cooperating fully with local authorities.

It is with a heavy heart that we mourn two of our pilots who lost their lives during an aircraft crash in Alabama today. Our deepest sympathy goes to their family and friends at this difficult time. Rest in peace, Shipmates. We have the watch. 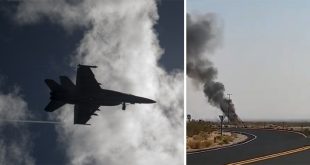