A Ukraine Air Force Antonov An-26 transport plane crashed on the E40 highway, while on approach to runway 16 at Chuhuiv Air Base. The aircraft carried cadets of the Kharkiv University of the Air Force. It came down at the side of the road and burst into flames.Two of the 27 occupants survived the crash.

The aircraft crashed in Kharkiv Oblast, a region which borders Russia to the east and the separatist area of Donbass to the south, at around 20:45 and caught fire.

By 21:53 the fire had been extinguished, says the Ukrainian state emergencies service.

The cause of the crash has not been confirmed but Kharkiv Oblast governor Oleksiy Kucher says he received information that the pilot had reported failure of the left engine.

But Kucher adds that such a failure is “not a critical situation” for an experienced pilot, and that the circumstances of the accident will be determined by the investigation.

The accident happened during the aircraft’s approach for landing, says the Ukrainian ministry of defence. It came down about 2km from the airfield.

“It is reported that, in addition to the crew, cadets of the Ivan Kozhedub National University of the Air Force were on board,” says the ministry.

“The leadership of the ministry of defence, the armed forces of Ukraine, and all personnel express their deepest condolences to the relatives and friends of the fallen servicemen.”

The Ivan Kozhedub National University of the Air Force is located in the city of Kharkiv, not far from the crash site.

It states that 20 of those on board were cadets.

Both the air force and the university have identified the aircraft as an An-26Sh variant, bearing the military number 76. The university and the Chuhuiv base are linked to the 203rd aviation training brigade.

To investigate the cause of the An-26 crash, the government of Ukraine says it has established a joint commission that includes the ministry of defence, ministry of internal affairs, a local state government official and the country’s deputy prime minister.

“The area of the catastrophe is surrounded and controlled by servicemen from the Military Law Enforcement Service in the armed forces of Ukraine,” says the ministry of defence.

At least 10 Antonov An-26 aircraft have been involved crashes since 2017, according to the Geneva-based Bureau of Aircraft Accidents Archives, including a 2018 crash that occurred during an attempted landing at the Hmeimin Air Base in northwest Syria that killed 39 people.

The An-26 is a twin-engine turboprop airplane manufactured from 1969 to 1986 in Kiev, Ukraine, when the country was part of the former Soviet Union. 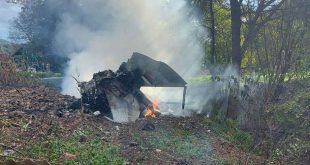