An unmanned aerial vehicle of coalition forces has crashed in southern Helmand province of Afghanistan.

“One of our unmanned aircraft experienced engine failure and crashed in Helmand province today. We are working to recover it,” the sources said.

Helmand is among the relatively volatile provinces in South of Afghanistan. Taliban militants are actively operating in some of its districts and often attempt to carry out attacks against the government and security institutions.

on March 17, 2019, US Air Force drone crashes close to Bagram Airfield in Afghanistan

The agency published video footage claiming that it had been shot by the US drones that were allegedly hacked by Iran. 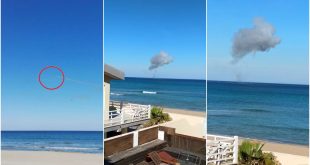 A Spanish Air Force C-101EB Aviojet crashed into the sea during a formation flight. …