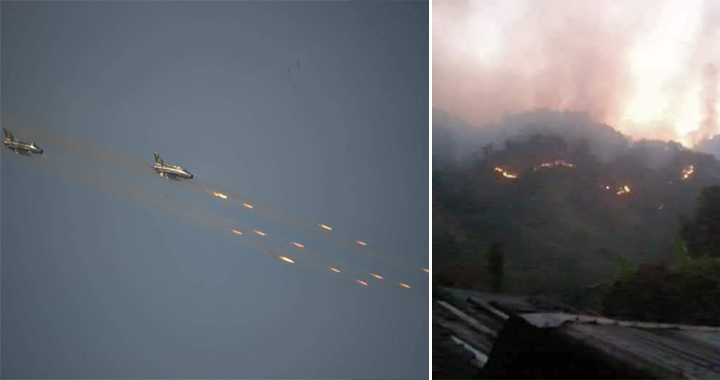 According to the Myanmar Local media reports, Intense clashes and airstrikes by government forces in western Myanmar’s Chin state over the weekend killed 21 civilians, injured more than two dozen others, and prompted more than 1,000 villagers to flee their homes

According to local lawmakers, a total of 21 villagers were killed and about two dozen were injured when Myanmar military fighter jets opened fire on four villages in Paletwa Township in western Myanmar’s Chin State on the weekend, according to local residents and relief groups.

On Monday, about 2,000 residents from 10 villages, including the four in which the casualties were reported, fled to Samee, a nearby town east of Paletwa, following the weekend’s fatal attacks on Wetma, Pyaing Tain and Meiksa Wa, said Salai Issac Khen, the former Chin State minister for municipal works, electricity, and industry.

Some of the villagers fleeing their homes arrived in Samee town on Monday afternoon, but many were still on their way, according to U Maung San Thar, the administrator of Meiksa Wa Village, who left his home at 5 p.m. yesterday.

“We heard the hospital in Samee town does not have enough medical supplies or doctors and is in need of support,” Salai Issac Khen wrote in a Facebook post on Monday.

Citing locals, he said 12 people were killed when Tatmadaw jet fighters shot at Meik Sa on Saturday. The next day, more attacks by jet fighters killed eight people in Wetma and one in Pyaing Tain, he said.

According to a Meiksa Wa resident who accompanied some of the injured villagers to hospital, 10 people from Meiksa Wa villages No. 2 and No. 3 who sustained injuries to their lower legs, thighs and upper bodies on Saturday were taken to Matupi Hospital, and four severely injured patients were taken to Mindat Hospital, both in Chin State. The person spoke on condition of anonymity out of fear for their safety. Others who sustained minor injures to their arms, neck, legs and bodies were treated at Samee Hospital.

Later, two of four people being treated at Mindat Hospital were referred to Mandalay. One of them was a severely injured woman who face was pierced by a long piece of wood above her left eye, according to local residents.

Twelve others injured in Wetma Village were sent to Matupi Hospital and were expected to arrive there on Monday afternoon, he said.

He added, “In one family, seven people were killed instantly and only two teenagers, aged 13 and 15, are left; both of them were injured. Some houses were in flames when we left. Three houses were burning. Later we heard all the houses in our village are gone. Luckily, my parents are safe, but our house was burnt and is gone. We heard the situation is even worse in Wetma and Pyaing Tain villages, but we have not had contact with other villagers yet.”

Military spokesman Brigadier General Zaw Min Tun said that as the military returned fire at the enemy, it was hard to tell which side caused the villagers’ casualties. He referred to a statement posted on the website of the Office of the Commander-in-Chief of Defense Services on Sunday that “the military outpost was heavily surrounded by the AA insurgents near Meiksa (east) and Meiksa (west) villages in Paletwa, therefore the soldiers had no choice and shot them back. Because of the mutual fire, some of the villagers died and [were] injured.”

It said, “eight injured–four men and four women–had arrived to Matupi hospital on Sunday morning at 11 a.m. and are receiving medical care.”

Regarding the claim of military fighter jets shooting at villagers, Brig-Gen Zaw Min Tun told The Irrawaddy on Monday, “We used fighter jets and helicopters in military operations, but it is difficult to tell [if the fatalities] were caused by the jets. When we use the jets, we take more care and aim only at the enemy’s location.”

The villagers whom The Irrawaddy spoke to said the AA and Tatmadaw troops had been fighting near their villages, which are situated next to Meewa hill.

The armed groups were fighting in Meewa, which is some 7 or 8 kilometers from Wetma and Meik Sa villages, said the Khumi Affairs Coordination Council (KACC).

According to an AA statement released on Monday, the group has clashed with Tatmadaw troops near Meewa for more than 40 days since Feb. 5.

According to a KACC member who requested anonymity, at least 17 Khumi villages have been affected by the fighting between the AA and the Myanmar military.

Usually, Paletwa residents in need of medical attention or basic commodities use the Kalandan River waterway to travel to Rakhine State’s Kyauktaw Township—a journey of a few hours—and then travel to Sittwe, the state capital. However, travel from Paletwa to Kyauktaw has been disrupted since last month due to the intensified fighting, forcing residents to seek medical attention and safety deeper inside Chin State, despite the poor road infrastructure.