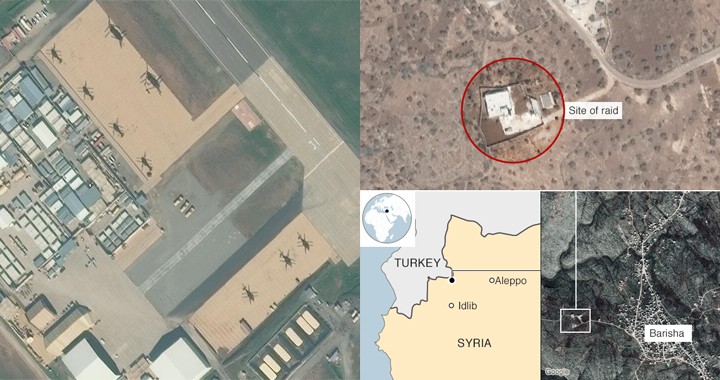 The Leader of ISIS (Islamic State of Iraq and Syria), Abu Bakr al-Baghdadi, was killed in a “dangerous and daring nighttime raid” by U.S. special operations forces in Syria this weekend.

The remains of ISIS leader Abu Bakr al-Baghdadi have been buried at sea, according to two US defense officials.

President Trump, who first tweeted that “something very big has just happened” at 9:23 PM local time in Washington D.C. on Saturday evening, talked for nearly an hour and a half about the raid on the morning of Oct. 27.

The President also praised Russian cooperation as significant in the execution of Sunday’s raid, also citing “Turkey, Syria, Iraq and the Syrian Kurds,” as contributing to the raid’s success.

While news media around the world reported on the story, and broadcast the U.S. President’s press conference on Sunday morning U.S. time, some interesting insights about the raid have begun to surface.

Asked at a press briefing if the US military has video or photos of Abu Bakr al-Baghdadi’s final moments, Army Gen. Mark A. Milley, chairman of the Joint Chiefs of Staff, said, “We do have videos, photos.”

“We’re not prepared to release those…they’re going through a declassification process,” Milley said.

He added that the photos and videos would be released by the military in the coming days.

How was Abu Bakr al-Baghdadi located?

According to the unconfirmed US media reports, the location of Baghdadi’s hideout in a small compound outside the village of Barisha in Idlib province, about 5km (three miles) south of the Turkish border, emerged from details given by an informant or informants over the past few months.

The US began to receive intelligence on the whereabouts of Abu Bakr al-Baghdadi about a month ago, according to Donald Trump. Intelligence officials were able to scope out his exact location – near the village of Barisha in north-west Syria – two weeks ago, and Trump was made aware of the planned raid at the end of last week.

Moments after a team including the US president gathered in the White House situation room at about 5pm ET (11 pm in Syria) on Saturday, eight helicopters – mostly twin-rotor CH-47s – took off from an airbase in northern Iraq.

Here’s What We Know About The U.S. Raid on Abu Bakr al-Baghdadi in Syria

Some media outlets, including CNN, suggested the raid was executed by members of the U.S. Army’s Special Forces Operational Detachment-D or “SFOD-D”. This unit is often referred to as “Delta” in popular media, although this name is not officially acknowledged by the U.S. Army and members of the special operations community suggest the name of the unit was changed years ago.

One CNN analyst also suggested that the U.S. Army’s 160th Special Operations Aviation Regiment (160th SOAR), the “Night Stalkers” operated the “8 helicopters” that flew the special operations team to the target area near Barisha, in the northwestern corner of Syria.

With eight of these aircraft involved in the raid, the number of special operators on the ground conducting the assault could have numbered as many as 60-80 members including specially trained military dogs.

Villagers in Barisha said there was shooting from helicopters for 30 minutes before troops became active on the ground. They said the helicopters fired missiles at two houses, flattening one.

Believing the main compound door to be booby-trapped, the soldiers entered by blasting through the wall.

As a military robot crept towards him and a dog was dispatched to subdue him, Baghdadi was confronted by a dead end. He ignited his suicide vest, killing himself and his children and causing the tunnel to collapse, according to Trump. The dog was injured and retrieved by the commandos.

To get to his remains, troops had to dig through debris. Lab technicians conducted an on-site DNA test and within 15 minutes of his death, they positively identified him.

Trump said US troops remained in the compound for about two hours after Baghdadi’s death and recovered highly sensitive material about Islamic State, including information about its future plans.

After the troops retreated, US fighter jets fired six rockets at the house, leveling it.

Just before 3.30 am Syrian time, the fleet of choppers took off for the return journey to Iraq.

It is probable that more details of the raid may surface over time. However, if intelligence collected during the raid leads the U.S. and other militaries in the region toward other potential targets, details of Sunday’s raid may remain classified.

Previous Here’s Why HMS Queen Elizabeth is Unlike Any Other Warship
Next Fastest Fighter Jet In The World? Its Over 50 Years Old Russian Aircraft