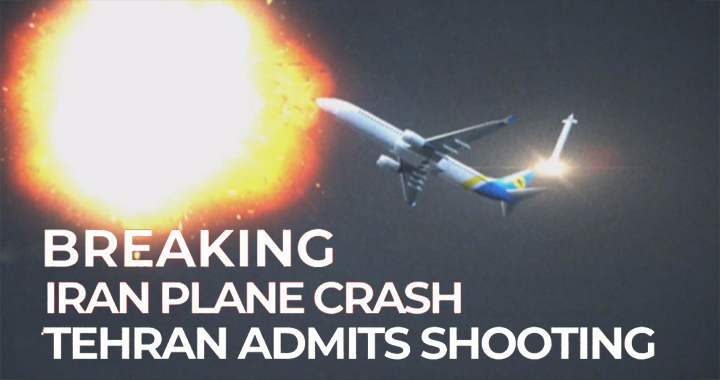 Iran has admitted its military made an “unforgivable mistake” in unintentionally shooting down a Ukrainian jetliner and killing all 176 people on board, after days of rejecting western intelligence reports that pointed to Tehran being responsible.

The plane, en route to the Ukrainian capital of Kyiv, was carrying 167 passengers and nine crew members from several countries, including 82 Iranians, 57 Canadians and 11 Ukrainians, according to officials.

According to the Iranian military’s statement, the plane was mistaken for a “hostile target” after it turned toward a “sensitive military center” of the Revolutionary Guard. Iran’s military forces were at their “highest level of readiness,” after the US killed the Iranian General Qassem Soleimani in an airstrike in Baghdad.

Around 36 hours ago, we verified what turned out to be the smoking gun: video showing PS752 getting hit by a missile. Hereby a very big shoutout to @NarimanGharib, who provided it to the @nytimes, and the videographer, who would like to remain anonymous. https://t.co/HxpaGV7urF pic.twitter.com/z75KldvViL

“In such a condition, because of human error and in an unintentional way, the flight was hit,” the statement said, apologizing for the disaster and saying that the country would upgrade its systems to prevent such “mistakes” in the future.

The military statement said those responsible would be held accountable.

Iranian news agency Fars reported that the country’s supreme leader, Ayatollah Ali Khamenei, Iran’s highest authority, was told about the cause of the crash on Friday and, following a meeting with security officials, ordered the information to be shared publicly.

Khamenei called on the military to “pursue probable shortcomings and guilt in the painful incident.”

Shortly after, a commander of the Iranian Revolutionary Guard said on state television that his aerospace unit takes full responsibility for the crash.

Hassan Rouhani, the Iranian president, wrote on Saturday: “The Islamic Republic of Iran deeply regrets this disastrous mistake. My thoughts and prayers go to all the mourning families. I offer my sincerest condolences.”

The Islamic Republic of Iran deeply regrets this disastrous mistake.

My thoughts and prayers go to all the mourning families. I offer my sincerest condolences. https://t.co/4dkePxupzm

The Iranian foreign minister, Javad Zarif, wrote: “A sad day. Preliminary conclusions of an internal investigation by armed forces: human error at the time of crisis caused by US adventurism led to disaster. Our profound regrets, apologies, and condolences to our people, to the families of all victims, and to other affected nations.”

The plane was mistaken for a hostile target after it turned towards a sensitive military center of the Revolutionary Guards, according to the military statement, carried on the official IRNA news agency.

“The military was at its highest level of readiness” amid the heightened tensions with the US, it said, adding: “In such a condition, because of human error and in an unintentional way, the flight was hit.”

The military apologized for the disaster and said it would upgrade its systems to prevent such mistakes in the future. The responsible parties would be referred to a judicial department within the military and held accountably, it said.

Our profound regrets, apologies and condolences to our people, to the families of all victims, and to other affected nations.
?

Ukraine’s president, Volodymyr Zelenskiy, responded on Saturday morning that Iran must make an official apology and agree to a full investigation and compensation, as well as cooperating with Ukraine’s own investigators. “Our 45 professionals should have full access and cooperation to establish justice,” a statement from the presidency said.

The Canadian prime minister, Justin Trudeau ,also said his country’s focus remained on “closure, accountability, transparency and justice” for the families of the 57 Canadian victims.

NEW: This CCTV footage appears to show an Iranian air defense system, northeast of Parand, firing a missile. I've geolocated it right under the approx. location where we think the missile hit the jet. Date is correct (18 Dey 1398) but time is off (7:48), maybe due to settings. pic.twitter.com/cuoadeEG1y

The black box recordings of the downed Ukrainian airliner will be downloaded in France, the head of Iran’s Civil Aviation Organization’s Accident Investigation Board said on Saturday, according to state media.

Although Iran made use of all its facilities to examine the content of the black box inside the country, the content will be sent to France so that any possible damage to the data would be avoided, Hassan Rezaeifar told state news agency IRNA.

The commander of Iran’s Islamic Revolutionary Guard Corps Aerospace Force said he had requested all commercial flights in Iran be grounded until tensions with the US cooled off.

But those within the Armed Forces authorized to make such a request from the government and aviation authority chose not to do so, Brigadier-General Amir-Ali Hajizadeh said at a press conference on Saturday.

Several planes had taken the exact same flight path as the Ukrainian airliner, up to an hour before it took off, aviation expert Geoffrey Thomas told CNN.

All of which raises the question — why was this particular aircraft shot down so soon after taking off?