On Saturday, Iran conducted a test of its medium-range ballistic missiles over the Indian Ocean, landing at least one within 100 miles of the USS Nimitz Carrier Strike Group.

At least one other missile landed within 20 miles of a merchant’s vessel, U.S. Navy officials told Fox News. The activity was expected and was not close enough to raise concerns for the carrier.

Amid high tensions between Iran and the United States and multiple overflights of the Persian Gulf by U.S. Air Force nuclear-capable B-52H bombers, Iran had carried out a form of intimidation of its own by firing long-range missiles in the vicinity of an American carrier strike group.

Missiles landed approximately 100 miles away from the carrier USS Nimitz in the Indian Ocean, with at least two exploding when they hit the surface and sending debris in all directions.

Although the missiles were not visible to the carrier group’s crew, U.S. satellites reportedly tracked the missile launches. The USS Nimitz has been deployed to the Middle East since April 2020 and had its stay in the area extended as tensions with Iran escalated around the anniversary of the CIA assassination of Iranian General Qasem Soleimani on January 3rd.

Iran has relied heavily on ballistic missiles to asymmetrically deter U.S. and other Western forces, and has developed a number of systems capable of targeting moving warships at sea at high speed.

Iran says that the launch was intended to demonstrate an anti-ship ballistic missile capability, a technology it has advertised since last year.

“One of our most important goals in defense policies and strategies is to be able to hit enemy weaponry, including aircraft carriers and warships, using long-range ballistic missiles,” said Islamic Revolutionary Guard Corps Commander Maj. Gen. Hossein Salami. “It is common to hit moving targets in the sea by low-speed cruise missiles . . . But using long-ranged missiles is a great defense achievement for us because we can hit the moving targets in the ocean from the heart of our land.”

While Iran is known to possess precise surface-to-surface ballistic missile guidance systems, hitting a ship is a much more challenging task. At present, China is the only nation known to field accurate, deployable, surface-launched anti-ship ballistic missiles at meaningful scale.

Over the past several weeks, Iran has ramped up its naval activity dramatically – seizing a South Korean tanker, holding two large-scale naval exercises and (on Saturday) launching ballistic missiles at maritime test targets. These movements coincide with the first anniversary of the assassination of the previous commander of the IRGC, Qasem Soleimani, by U.S. forces last year. The activity also comes as Tehran launches new plans to process uranium metal in its nuclear fuel program – a development that could eventually support the manufacture of nuclear weapons. 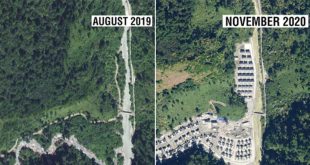