The Israeli military shot down a Syrian fighter jet after it entered Israeli airspace on Tuesday afternoon, the Israel Defense Forces (IDF)

The Syrian fighter jet was shot down by the Israeli Defence Force with two patriot missiles. One pilot died in the crash, the fate of the other pilot is unknown.

The Russian-made Sukhoi jet entered two kilometres into Israeli airspace when two Patriot missiles were launched to intercept the aircraft, the IDF said. The missiles hit the jet once it had crossed back into Syrian airspace, the IDF said, adding that the military did not know what happened to the pilot of the aircraft.

Syria said its jet was conducting an operation against “terrorist groups” when it was hit by Israeli fire, according to a state media report.

“The Israeli enemy targeted one of our warplanes while conducting air raids against these groups in the area of Saida on the outskirts of al-Yarmouk Basin in the Syrian airspace,” a Syrian state TV banner said, quoting a military source.

Israel said there had been a notable increase in activity by the Syrian military in the area on Tuesday, especially the Syrian air force, as a result of ongoing internal fighting in the war-torn country.

The jet took off from the T-4 military base northeast of Damascus, according to IDF spokesman Lt. Col. Jonathan Conricus. Israel has struck the T-4 base multiple times in the last year, targeting what the Israeli military has said are Iranian military assets at the base.

Before it launched its strike, Israel communicated with Russia to make sure the jet was Syrian, and not part of the Russian air force, according to Conricus. So-called “deconfliction measures” have been in place between the two countries since Russian forces entered Syria on behalf of President Bashar al-Assad.

The jet was either a Sukhoi 22 or Sukhoi 24, the IDF said Tuesday. Both jets are Russian-made aircraft developed in the 1960s and 1970s and operated by the Syrian air force. One day earlier, Israel launched two missiles from the David’s Sling missile defense system at two Syrian rockets which the IDF believed were heading for Israeli territory. When it became clear the two Syrian SS-22 missiles were going to land inside Syria, the David’s Sling missiles were ordered to self-destruct, the Israeli military said. One missile successfully self-destructed, while it was unclear what happened to the second, the military said.

Related Link: 10 Reason Why No One Dares TO Challenge Israel 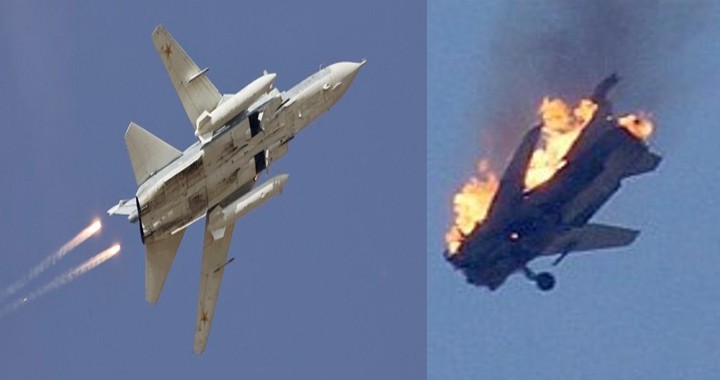 According to the website Janes 360 there is a squadron of SU-22 M4 aircraft at the T4 base. Nicknamed the ‘Fitter’, the aircraft has a range of 2,200 km and is one of seven types of warplanes the Syrian army has in its arsenal.

In 1979 Moscow agreed to sell 40 newer SU-22Ms to Damascus, according to an article in The National Interest. Moscow sent more variants of the plane in the 1980’s, but Syria lost several of them fighting Israel during the 1982 Lebanon war. By 2010 the Syrian air force only had around fifty of the aircraft, many of them needing upgrades.

Once the Syrian civil war broke out the ageing warplane has been a backbone of the conflict, armed with a variety of weapons, including bombs, rockets and “rocket pods” that fire 80mm rockets. Because the rebels had no air force and few anti-aircraft weapons, the Sukhois could operate with impunity, sometimes making low bombing runs over cities. But attrition reduced the fleet until Iran agreed to help acquire spare parts. According to the National Interest piece, there were 30 flying by 2016 packing 500-kilogram warheads such as the FAB-500 and ODAB 500. In April 2017 Human Rights Watch alleged that an SU-22 dropped the chemical weapons that caused the Khan Sheikhoun massacre.

The SU-22s have been shot down before in Syria. In June 2017 the US shot one down in eastern Syria. The SU-22 was on a bombing mission, similar to the incident this week over the Golan. The IDF has also struck the T4 base where the fighter reportedly flew from. In February an Iranian drone entered Israeli airspace and in retaliation, Jerusalem carried out airstrikes on the T4 base. The elderly SU-22s did not try to interdict Israel’s much more advanced attack. Many of them are likely not armed regularly for air to air combat because they are mostly being used to strike Syrian rebel positions, including civilian areas.

According to Syrian reports, the plane was flown by a Syrian Air Force Colonel and he was killed in the area held by Islamic State near the Golan. He would have been one of many high ranking Syrian pilots who has died over the years. Lt. Col. Bassel Saleh was killed in February 2017 when his SU-22 crashed.

The SU-22 flying toward Israel was entering an area that should have been a no-fly zone next to the ceasefire line and was operating in a sensitive area close to the border. However, over the last week, the Syrian regime has been carrying out heavy airstrikes and bombardment of the ISIS pocket near the Golan, with the strikes coming closer and closer to the border. Over the last weeks, Israel’s air defences have also been activated to oppose Syrian regime drones that kept flying close to or into Israeli airspace. An aircraft flying toward Israel was a major escalation, regardless of the ordinance, it was carrying.