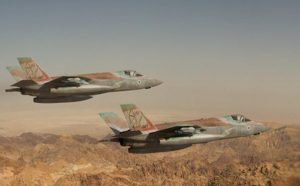 Fighter jets flew over Syrian and Iraqi airspace to reach Iran .According to  sources fighter jets  even targeted locations in the Iranian cities Bandar Abbas, Esfahan and Shiraz . Fighter jets also circled at high altitude above Persian Gulf sites suspected of being associated with the Iranian nuclear program

The act is a signal of heightened regional tensions, especially in light of recent Israeli military attacks in Syria, including against Iranian bases in the country.

It also states that the two jets went undetected by radar, including by the Russian radar system located in Syria

The source added that the seven F-35 fighters in active service in the IAF have conducted a number of missions in Syria and on the Lebanese-Syrian border. He underlined that the fighter jets can travel from Israel to Iran twice without refueling.

Israel has admitted to launching about 100 air strikes on Syria over the past five years, targeting Hezbollah terrorists, weapons convoys and infrastructure, and it is believed to be behind dozens more.

Well the credibility of source Al-Jarida is questionable . It is generally assumed in arab world that paper is used as an israeli platform for conveying  messages to Arab countries in middle east