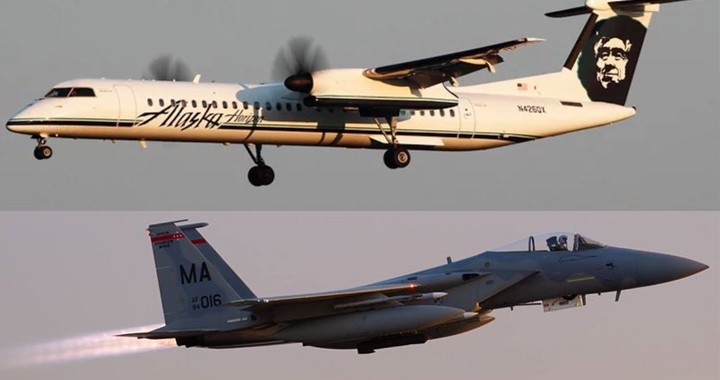 A 29-year-old suicidal man stole a 76 seater Alaska Airlines/Horizon Air Bombardier Dash 8 from Seattle’s international airport for a short, dramatic flight before crashing on a nearby island.

The aircraft was intercepted by a pair of F-15C Eagles from the 142nd Fighter Wing of the Oregon Air National Guard launched from Portland International Airport. The F-15s “broke the sound barrier” on the way to intercept the stolen airliner according to numerous reports on Twitter and from local Washington state news media. Facebook users reported hearing sonic booms over Eatonville.

Some dude stole a plane from #Seatac (Allegedly), did a loop-the-loop, ALMOST crashed into #ChambersBay, then crossed in front of our party, chased by fighter jets and subsequently crashed. Weird times. pic.twitter.com/Ra4LcIhwfU

Witnesses described seeing the aircraft performing barrel rolls and loop-the-loops as the military planes directed it away from highly-populated areas and towards Ketron Island, where it crashed into a ball of flame.

While still in the air, the pilot was heard telling traffic controllers he was ‘just a broken guy’ before telling them he was preparing for ‘jail time for life’.

Here is a Transcripts of radio communications from scanners suggest the man who stole the Dash 8 was not a pilot and had only practiced flying on a simulator. He spoke with air traffic controllers who were trying to convince him to attempt to land the aircraft.

KHQPETERMAXWELL: RT TheAviationBeat: ATC Audio from the stolen Horizon Air Q400: “I think I am going to try to do a barrel roll and if that goes good then I am going to go nose down and call it a night.” https://t.co/dLl539ASsA

The crash sparked a fire in the dense forest. Flames lit up the night as they spread from the burning wreckage to nearby trees.

An Alaska Airlines/Horizon Air Bombardier Dash 8 twin-engine turboprop commuter airliner was commandeered by a lone male, reported to be an airport maintenance worker, and crashed into the ground on Ketron Island, which is southwest of Tacoma, in south Puget Sound. There were no passengers on board the aircraft. Ketron Island has only about 20 year-round residents according to news outlets. The lone man did not survive and is being reported as the only person killed in the incident.

The ground service agent, referred to as ‘Rich’ and ‘Richard’ by air traffic controllers, was born in Key West, Florida and moved to Alaska as a child. He was an employee of Horizon Airlines

He “conducted unauthorized takeoff” of an airplane carrying no passengers, then “crashed in south Puget Sound,” Sea-Tac Airport officials said on Twitter.

“This is not a terrorist incident,” Ed Troyer with the Pierce County Sheriff’s office wrote on Twitter.

“Confirmed info… this is a single suicide male. We know who he is. No others involved,” Troyer wrote The suspect was identified as a 29-year-old airline mechanic and Pierce county resident who “acted alone,” Troyer added, confirming that there were “no passengers on the plane” when it crashed.

The sheriff’s office also said that the F-15s, which were scrambled out of Portland, in the nearby state of Oregon, arrived minutes after the plane was stolen and kept the aircraft “out of harms way and people on ground safe.” Horizon Air CEO Constance Van Muehlen issued a video statement describing the incident.

John Waldron, who took dramatic video of the stolen plane flying in a loop, told CNN that he was out for an evening stroll when he saw the two jet fighters following the turboprop airplane.

His first thought was that they were practicing for an air show. “So, I started to capture video, just because I thought it was, kind of bizarre,” he told CNN.

Waldron said it seemed that the jets were chasing down the airplane. “I thought this is really odd. Kept the video rolling.” Then the passenger plane pilot “did a complete loop … I couldn’t believe he recovered.” He estimates that the plane at its lowest point “was no less than 100 feet (30.5 meters) above the water.” Then the pilot “pulled — pretty much straight up. And kind of at an angle. And almost stalled the aircraft. Somehow he got it leveled back off. And then made his way down toward the island.” Waldron said that he was prepared to “run and take cover.” He briefly turned away, then turned back and saw the explosion as the plane crashed.

“Saw a bright, pinpoint area of flame. And the smoke. I thought, oh, my god. I think he just crashed.”

One report said the man joked with traffic controllers during the short flight as F15s chased him that he was going to jail.

The Pierce County Sheriff’s Office said on Twitter the crash may have been caused by the mechanic “doing stunts in air or lack of flying skills.”

It said the F15 fighter planes “made it within a few minutes of theft of plane. Pilots kept plane out of harms way and people othe n ground safe.”

Richard Russell, a ground service agent at Sea-Tac International Airport, took off in an empty 76-seater plane at the height of rush hour on Friday evening.

Mr Russell was not named by authorities, but relatives and co-workers identified the 29-year-old, who went by the name Beebo, as the man behind the hijacking.

“He was a faithful husband, a loving son, and a good friend,” the Russell family said in a statement.

“A childhood friend remarked that Beebo was loved by everyone because he was kind and gentle to each person he met.

“This is a complete shock to us,” they said in a statement read by a friend. “We are devastated by these events, and Jesus is truly the only one holding this family together right now. Without him, we would be hopeless.”

“As the voice recordings show, Beebo’s intent was not to harm anyone. He was right in saying that there are so many people who have loved him,” they said.

Rick Christenson, a former operational supervisor with Horizon Air, told The Seattle Times: “He was a quiet guy. It seemed like he was well liked by the other workers.

“I feel really bad for Richard and for his family. I hope they can make it through this.”

“I’ve got a lot of people that care about me,” he told air traffic controllers. “It’s going to disappoint them to hear that I did this.”

Previous When Israel Shot Down 5 Soviet MiGs in 3 Minutes
Next Dimonim Air Light plane with 9 people aboard reported missing in Papua, Indonesia