Officials from Pakistani Armed Forces have released some video and images showing, as they claim, an Indian pilot from fighter jet downed on its side of Kashmir.

According to the Pakistani military, country’s Air Force on Wednesday shot down two Indian fighter jets intruding Pakistani airspace in a “valiant and befitting” response to Indian aggression.

Pakistan says it captured 2 Indian pilots from plane downed on its side of Kashmir: 1 is in hospital, other in custody

In the video shared by Pakistan, a person is wearing a flight suit is heard saying that he is Wing Commander Abhinandan. He is blindfolded and gives out his service number. He then asks if he is in the custody of the Pakistan military.

“My name is Wing Commander Abhinandan and my service number is 27981,” said a man on video.

“I am a flying pilot and my religion is Hindu,” the detained pilot continues.

Upon probing for further information, the pilot refuses to speak saying, “I am sorry sir, that’s all I am supposed to tell you.” 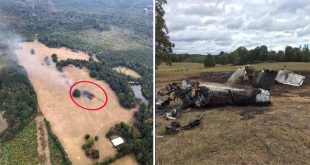