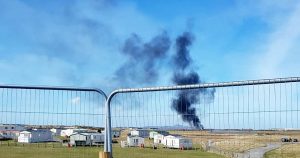 Two people are understood to have been onboard the Hawk aircraft when it went down shortly before 1.30pm on Tuesday.

An RAF spokesman said: “We are aware of an incident today at RAF Valley involving a Hawk aircraft. We are investigating the incident and it would be inappropriate to comment at this stage.”

Rob Jones, the manager of nearby Anglesey golf club, said his customers had seen a parachute eject from the plane before it crashed on the runway.

It is believed the aircraft was flying from RAF Valley, where training takes place for mountain and maritime operations, back to RAF Scampton in Lincolnshire, where the Red Arrows are based, when it crashed. 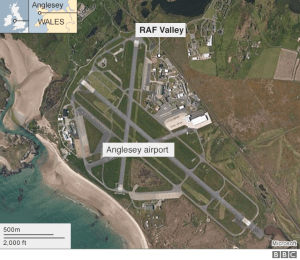 Nearby residents said they heard a loud explosion followed by a huge plume of black smoke after the aircraft went down.

The Red Arrows are the RAF’s world-famous aerobatic team, performing stunts and daredevil displays in the distinctive Hawk fast-jets.

In total, about 1,500 service personnel, civil servants and contractors work at RAF Valley. Aircrews regularly visit the base to carry out simulation training.