According to the US Navy, For the second time in four days, a Russian fighter jet conducted an “unsafe” intercept of a US aircraft over the Mediterranean Sea.

A Russian fighter came within 25 feet of a Navy P-8A Poseidon reconnaissance aircraft over the in international airspace over the Mediterranean Sea, U.S. 6th Fleet announced.

Over a period of just under two hours, the P-8A was intercepted twice by a Russian Air Force SU-35 Flanker-E. The incident is the second unsafe intercept between a P-8A and Russian fighter over the Mediterranean.

“The first intercept was deemed safe and professional. The second intercept was determined to be unsafe and unprofessional due to the SU-35 a conducting high-speed, high-powered maneuver that decreased aircraft separation to within 25 feet, directly in front of the P-8A, exposing the U.S. aircraft to wake turbulence and jet exhaust,” read the statement from U.S. 6th Fleet.

“In response, the P-8A, which was operating at a constant altitude and airspeed, descended to create separation and ensure safety of both aircraft. The unnecessary actions of the Russian SU-35 pilot were inconsistent with good airmanship and international flight rules, seriously jeopardizing the safety of flight of both aircraft.”

Russia’s defense ministry said in a statement Monday it scrambled a fighter from Hmeymim air base in Syria to shadow the U.S. aircraft, which it said was flying toward Russian military facilities. The defense ministry did not address the Navy’s complaint that the Russian fighter performed unsafe maneuvers.

The incident follows an intercept in Wednesday in which a Flanker made what the Navy deemed was an unsafe and unprofessional maneuver within 25 feet of a P-8A over the Mediterranean, U.S. 6th Fleet said.

The Flanker-E came within 25 feet of the P-8A during an inverted maneuver.

“The crew of the P-8A reported wake turbulence following the interaction. The duration of the intercept was approximately 42 minutes,” read a statement from U.S. 6th Fleet, adding that “this interaction was irresponsible.”

In both cases, the U.S. aircraft were operating consistent with international law and did not provoke this Russian activity. 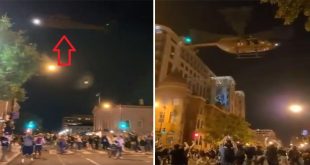 Low-flying military helicopters used a wind-blowing tactic to break up crowds in Washington, DC, on …