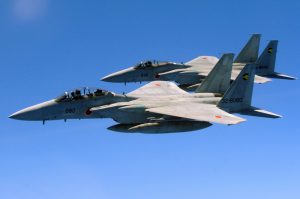 It wasn’t immediately clear what caused the crash or whether the pilots attempted to eject. The air force did not disclose their names or other details.

The air force said in a statement that the pilots were flying back to their base in the city of Daegu after an unspecified mission. It said no civilian injuries or property damage had been reported.

It took more than two hours for dozens of firefighters and rescuers to reach the wreckage on foot through heavy fog deep in the mountain, an official from the Chilgok Fire Department said.