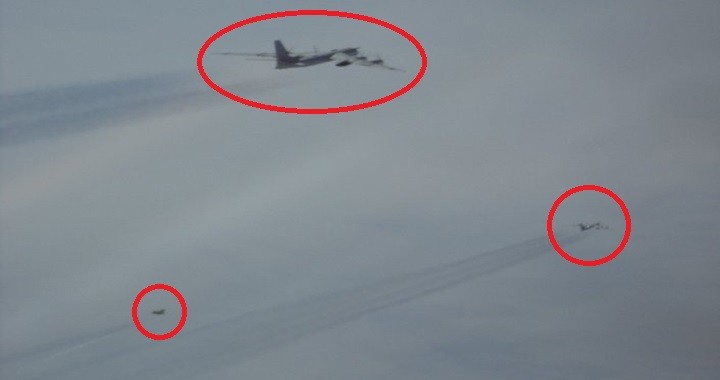 Russian strategic bombers with fighter escorts twice tested US air defenses in two days with flights off the coast of Alaska, forcing the US to scramble F-22 stealth fighters to intercept the Russian aircraft.

On May 20, 2019, two pairs of F-22s and an E-3 Airborne Early Warning and Control System were scrambled from North American Aerospace Defense Command to carry out VIDs (Visual Identification) of a total of four Tupolev Tu-95 bombers and two Su-35 fighters entering the Alaskan Air Defense Identification Zone (ADIZ).

Russian strategic bombers with fighter escorts twice tested US air defenses in two days with flights off the coast of Alaska, forcing the US to scramble F-22 stealth fighters to intercept the Russian aircraft.

The Russian aircraft remained in international airspace and at no time entered the United States or Canadian sovereign airspace.

NORAD has intercepted an average of approximately six to seven Russian sorties entering its ADIZ since Russia resumed long-range aviation patrols in 2007. This is the fourth and fifth intercepts this year and the second day in a row that Russian bombers have flown into the Alaskan ADIZ.

NORAD employs a layered defense network of radars, satellites, and fighter aircraft to identify aircraft and determine the appropriate response. The identification and monitoring of aircraft entering a US or Canadian ADIZ demonstrates how NORAD executes its aerospace warning and aerospace control missions for the United States and Canada.

They were picked up as they entered the Alaska Air Defense Identification Zone, a perimeter line that lies outside national airspace but within which air traffic is kept under constant surveillance to reduce response times in case of a hostile threat.

“Our ability to deter and defeat threats to our citizens and vital infrastructure starts with detecting, tracking, and positively identifying aircraft in our airspace,” NORAD’s commander, General Terrence O’Shaughnessy, said.

The United States has four Air Defense Identification Zones. The Alaska zone extends about 200 miles (320 kilometres) from the state’s coast.

The Russian Defense Ministry confirmed the incident in a tweet

It said the Aerospace Forces “made scheduled sorties over the neutral waters of the Chukotka, Bering and Okhotsk seas, as well as along the western coast of Alaska and the northern coast of the Aleutian Islands.”

“At certain stages of the route, Russian aircraft were escorted by F-22 fighter jets of the USAF. The total flight time exceeded 12 hours,” the Russian ministry added.

Previous How U.S. Navy used search for Titanic as a cover to locate sunken Nuclear Submarines
Next The story of the rogue B-52 pilot who crashed his bomber after manoeuvring it beyond its operational limits at low altitude