A frantic search is on for an F-35 that disappeared from radar and appears to have crashed somewhere off Japan.

A US Navy P-8A Poseidon maritime patrol aircraft and the Arleigh Burke-class guided-missile destroyer USS Stethem with the Navy’s 7th Fleet are assisting the Japanese air and maritime assets dispatched to find the missing aircraft and its pilot, the Navy said in a statement Wednesday.

Japan has sent out U-125A search-and-rescue aircraft, UH-60 Black Hawk helicopters, and P-3C maritime surveillance aircraft, as well as three coast-guard vessels to search for the downed F-35, according to The Diplomat.

“We continue to hope for the safe recovery of the pilot, and our thoughts are with his family and all of our Japanese partners as they conduct this search,” United States Forces Japan said in a statement.

While both the US and Japan are committed to finding the pilot, another aspect of the ongoing search is protecting the technology aboard the jet by finding the advanced aircraft before someone else does.

So far, only parts of the missing aircraft have been recovered. The discovery indicates that the plane crashed, likely marking the first F-35A crash.

“There is no price too high in this world for China and Russia to pay to get Japan’s missing F-35, if they can. Big deal,” Tom Moore, a former senior professional staff member with the US Senate Foreign Relations Committee, tweeted Tuesday.

There is no price too high in this world for China and Russia to pay to get Japan's missing F-35, if they can. Big deal.

While refusing to into details about what steps the US is taking to protect its technology, the spokesman pointed to the current situation with Turkey as evidence of the lengths the US will go to in order to ensure its technology does not fall into the wrong hands.

“If one of Japan’s F-35s is sitting at the bottom of the Pacific, we are probably about to see one of the biggest underwater espionage and counter-espionage ops since the Cold War,” Tyler Rogoway, editor of respected defense publication The War Zone, tweeted.

If one of Japan’s F-35s is sitting at the bottom of the Pacific, we are probably about to see one of the biggest underwater espionage and counter-espionage ops since the Cold War. If it was operating without its radar reflectors pinpointing where it went in may be an issue. 1/2

Basically, if Russia or China, perhaps using their advanced and stealthy submarines to probe the ocean floor, first found the jet, they would gain a treasure trove of secrets about the most expensive weapons system in the history of the world.

Reverse engineering the technology could allow Russia and China to build their own versions of the jet, up to a point.

“The usefulness for Russia or China of recovering some or all of the wreckage would depend on how much damage the aircraft sustained upon hitting the water,” Justin Bronk, a combat-aviation expert at the Royal United Services Institute

“The general shape of the jet is well-known, as are its performance characteristics so not much to gain there but parts of radar and other sensors would be prime targets for recover and testing/even attempts at reverse engineering,” he added.

Russia specifically operates a fleet of shadowy submarines meant for very deep dives and research. The US and Japan have advanced maritime capabilities to search for the fallen jet but mostly rely on two of the US’s aging rescue and salvage ships and on large nuclear submarines, which may not be ideal for the rescue mission.

The F-35A was being flown by an experienced pilot with more than 3,200 flight hours, including 60 hours in the new stealth fighters. Radar contact with the aircraft was lost while it was about 85 miles east of Misawa Air Base in northern Japan. The Japan Air Self Defense Force has grounded its entire fleet of F-35s in response. 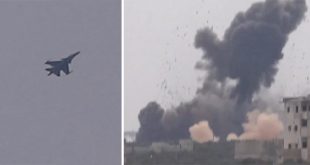