As we have reported earlier the U.S. Military has accused Russia of sending fighter jets to Libya to support mercenaries.

On May 26, U.S. Africa Command released the first official assessment of the deployment to Libya of a certain number of Russian MiG-29s and Su-24s that was exposed by satellite images.

on May 27, 2020, U.S. Africa Command (AFRICOM) Tweeted out the new imagery and information. The satellite images are dated May 20, a day before the first reports began to emerge that Russian MiG-29s, as well as Su-24 Fencers, had touched down in Libya.

According to the U.S. military’s top command for operations in Africa Russia has sent at least 14 combat jets to Libya and that Russian military pilots are flying them.

“Over multiple days in May, Russian MiG 29s and SU-24 fighters departed Russia. At that time, all the aircraft have Russian Federation Air Force markings,” one of the Tweets reads. “After they land at Khmeimin Air Base in Syria, the MiG 29s are repainted and emerge with no national markings.”

“They are flown by Russian military members & escorted by Russian fighters based in Syria to Libya, landing in Eastern Libya near Tobruk for fuel,” another Tweet continues. “At least 14 newly unmarked Russian aircraft are then delivered to Al Jufra Air Base in Libya.”

The satellite images show various supporting equipment, including at least one APA-5 generator truck, used for starting aircraft engines on the ground, also in place at Al Jufrah.

Some of this equipment is seen clustered around one of the hardened aircraft shelters at the southern end of the base. 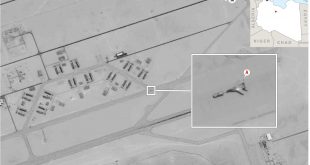