Reports indicate the pilot ejected from the aircraft. His condition is not known at this time.

MCAS Beaufort is home to Marine Fighter Attack Training Squadron 501 (VMFAT-501), the “Warlords”. The unit is a training squadron equipped with 20 F-35B Lightning II aircraft and serves as the Fleet Replacement Squadron.

This first-ever crash of an F-35 Joint Strike Fighter comes only one day after a U.S. Marine F-35B flew its first operational combat mission over Afghanistan.

The pilot of the plane safely ejected but was being evaluated for injuries, according to Capt. Bob Bromage, spokesperson for the sheriff’s office. There were no other injuries reported.

The plane crash was reported near Clarendon Road and Joe Allen Drive in the Grays Hill area, the sheriff’s office said in a news release.

Military plane crash in Beaufort near Joe Allen Drive area. Appears to have crashed on a bluff/island owned by Clarendon Plantations. Not usually many people over there. Praying for the safety of all involved! pic.twitter.com/dM5a8v2lg1

Capt. Christopher Harrison, a Marine Corps spokesman, said the plane that crashed was an F-35B with Marine Training Squadron VMFAT-501.

The cause of the crash is under investigation, he said, and the jet was not carrying any ordnance, Harrison said.

Military officials confirmed that it was a Marine Corps plane that has crashed, Bromage said.

MCAS Beaufort is home to five F/A18 squadrons and one F-35B Fleet Replacement Squadron, according to the air station’s website. This past summer Defense News reported that an ongoing shortage of spare parts and software issues is causing “a headache” for MCAS.

This story will be updated as more information becomes available. 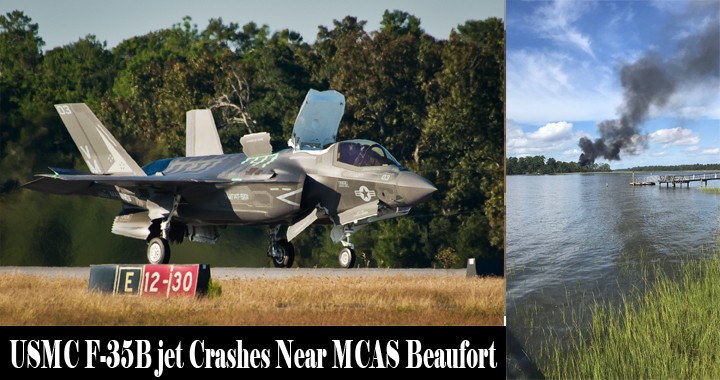