Watch: F-35B Crashing Into The Ground After Mid-Air Collision With KC-130J During Air-to-air Refueling

on Sept. 29, 2020, at approximately 16.00LT a U.S. Marine Corps Lockheed Martin F-35B Lightning II, callsign VOLT 93 made contact with a Lockheed KC-130J Hercules (166765) callsign RAIDER 50 during air-to-air refueling. The F-35B pilot successfully ejected and the aircraft crashed. The KC-130J made a forced gear-up landing in a carrot field near Thermal, California.

The pilot of the STOVL (Short Take-Off Vertical Landing) variant of the Lightning II jet ejected safely and, according to the USMC, is being treated. All the KC-130J crew members have been reported safe.

The KC-130J was attached to the Marine Aerial Refueler Transport Squadron 352 (VMGR-352) out of MCAS Miramar, California. Photos of the aircraft show substantial damage to the no. 3 and 4 engines; all propeller blades had separated. The refueling pod mounted between engines no.3 and 4 had separated.

Video has emerged on social media showing a U.S. Marine Corps F-35B Joint Strike Fight crashing into the ground in a ball of flame after colliding with one of the service’s KC-130J Hercules tanker-transports over southern California.

The clip, seen below and taken by bystanders on the ground, who were also thankfully not harmed, shows the dramatic impact of the F-35B and the spectacular explosion that follows. A woman can be heard yelling “oh my god, you guys” in the background.

The F-35B’s pilot was thankfully able to eject safely and the entire crew of the KC-130J also survived after a harrowing emergency landing.

The video underscores the fate that would have awaited the F-35B’s pilot if they could not have ejected for some reason. Martin-Baker, the company that builds the US16E ejection seats found in each Joint Strike Fighter, including all F-35A and F-35C variants, was quick to highlight on social media that its products have now saved a total of 7,633 lives over the years.

This accident otherwise remains under investigation . 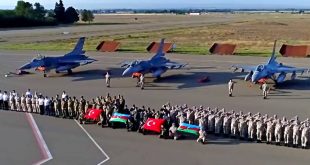 Credits: Unknown Via 301/ twitter A Su-25 jet of the Armenian Air Force was shot …