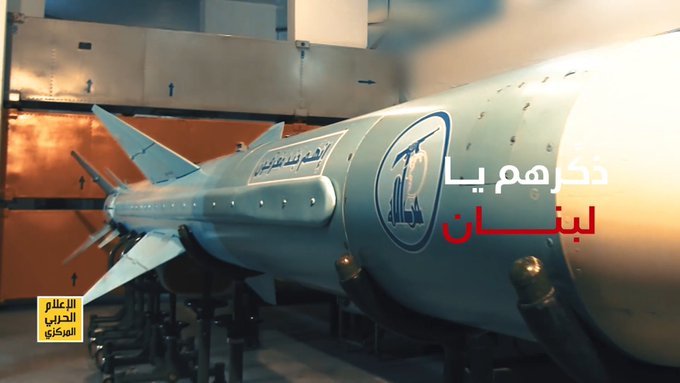 A twitter account affiliated with Hezbollah posted a photo of a new missile, which he says is capable of destroying all military battleships.

According to Israeli media, which is circulating the image, the missile is the same as the one that struck the INS Hanit during the 2006 Second Lebanon War, killing 4 soldiers.

“Our new missile is capable of destroying all military battleships, killing all who are on board,” wrote the Hezbollah activist, who often posts photos of South Lebanon Army (SLA) members and their families who have moved to Israel, announcing that they are being called to trial.

In August, Hezbollah released footage and pictures of the anti-ship missile that struck the INS Hanit during the 2006 Second Lebanon War, an incident that killed four Israeli soldiers in one of the most significant attacks against the IDF in the war.

In a documentary called #Army_To_Be_Drowned aired on Hezbollah’s al-Manar TV channel marking the war the group aired reconnaissance footage of the ship from the Lebanese coastline, preparations for the launch of the missile, the operations room which directed the strike as well as nighttime footage which showed the impact of the Chinese-made C-802 anti-ship cruise missile.

According to al-Manar, Hezbollah’s navy commander “Hajj Jalal” said the rocket was launched from the Beirut suburb of Ouzai after “the Zionist enemy escalated its attacks on various Lebanese areas.”

Adding that the group’s leadership delayed the operation for several hours, Jalal said that the group “could have struck Israel‘s warship SAAR-5 in the 2006 war before it entered Lebanon’s international waters,” he said.

Days earlier, Hezbollah Secretary General Sayyed Hassan Nasrallah said the movement observes “no red lines” any longer in responding to Israel after the group retaliated a drone incursion into Lebanon on August 25th.

“It is the right of the Lebanese to defend their country and sovereignty, and there will be no red lines,” he said.

“Despite all the threats and intimidation, today we are affirming the balance of power and reinforcing the deterrent force that protects our country,” Nasrallah said.

It should be noted that the picture of the missile and the treat comes amid an escalation in the Middle East with Saudi Arabian oil fields being attacked and US President Donald Trump saying that he US was prepared to strike whomever the Kingdom claims holds responsibility.

It furthermore comes a short while before the snap general elections in Israel. Prime Minister Benjamin Netanyahu needs a “win” to prove his value to the Israel voters, whose belief in his grand promises of annexing even more territories is questionable.