India’s plans for a third aircraft carrier have reportedly been shelved over financial woes, after having been placed on hold in May 2019.

INS Vishal, also known as Indigenous Aircraft Carrier 2 (IAC-2), is a planned aircraft carrier to be built by Cochin Shipyard Limited for the Indian Navy.

It is intended to be the second aircraft carrier to be built in India after INS Vikrant (IAC-1). Its name Vishal means ‘giant’ in Sanskrit.

The carrier, INS Vishal, was planned as a much more ambitious and higher-end warship to be fielded alongside the Navy’s sole serving carrier, the INS Vikramaditya, and the upcoming light carrier INS Vikrant.

The INS Vikramaditya was laid down in the Soviet Union in the 1980s and was comprehensively refurbished in Russia and equipped with advanced MiG-29K fighters. It has a displacement of approximately 45,000 tons. The lighter INS Vikrant, at around 40,000 tons, was built in India with Russian assistance and has been behind schedule. Both carriers are comparatively light and rely on ski-jump launch systems – similar to that of the British Queen Elizabeth Class and Russian Kuznetsov Class – which reduce the maximum takeoff weights of fighters operating from their decks.

“We are expecting the delivery of IAC Vikrant by February 2021. Then, its aviation trials will take at least a year to complete before its induction into the Navy’s fleet. We expect the shipyard to meet this new deadline,” the Indian Navy official said while adding that the long-delayed warship was scheduled to be ready by the end of 2018, but due to delay in procuring multiple equipments from Russia, the delivery date has been extended.

The difficulties enveloping the INS Vikrant, according to experts talking to the EurAsian Times, is believed to have dissuaded the Indian Navy from seeking to commission more indigenous carriers – particularly those with more ambitious designs like the Vishal.

The INS Vishal was initially planned to have a displacement of over 65,000 tons and would integrate an electromagnetic catapult system (EMALS) to allow fighters to deploy with considerably more fuel and munitions. EMALS would also better facilitate the deployment of more advanced carrier-based support aircraft including airborne early warning platforms such as the E-2 Hawkeye and KJ-600.

The lack of EMALS on current Indian carrier designs will place them at a disadvantage against next-generation American and Chinese carriers but has also made them considerably economical both to develop and to operate. EMALS technologies were to be purchased from the US, which is currently endeavoring to make them compatible with its new generation of F-35C fighters on the carrier USS Gerald Ford.

The high-end capabilities planned for INS Vishal led to it being widely termed a supercarrier – rivaled only by the American Gerald Ford Class and Chinese Type 002 and Type 003 Classes. Several warships from each respective class are expected to be in service in the U.S. Navies and Chinese by the time the Vishal would have entered service.

While cost estimates for the Indian program were reduced considerably after plans to blend a nuclear propulsion system were scrapped, the warship’s development and operational costs and additional costs of high-end carrier-based fighters and other aircraft are conclusively still deemed unreasonable.

While the decision could be reversed, experts talking to EurAsian Times have stated that the Indian Navy could stick to a two-carrier fleet as maritime threats remain relatively low. 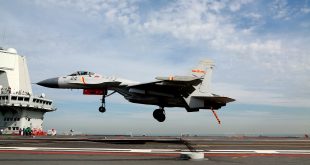