Now according to the latest news, Russian Shtorm aircraft carrier to potentially be fitted with S-500 anti-aircraft systems.

The S-500 Prometey also known as 55R6M “Triumfator-M”, is a Russian surface-to-air missile/anti-ballistic missile system under development by the Almaz-Antey Air Defence Concern. Initially planned to be in production by 2014, it is currently targeting 2021 for the first delivery.

The Prometheus S-500 is expected to have an extended range of up to 600 km (an improvement of 200km over the S-400) and simultaneously engage up to 10 targets. The radar range is also more than that of the S-400 and the system will have the potential to destroy hypersonic and ballistic targets with interceptors operating at an altitude higher than 185km.

The S-500 is not just a conventional air and missile defence system, but a weapon that is capable of destroying of low-orbit satellites and space-launched weapons from hypersonic aircraft, shock hypersonic UAVs and orbital platforms.

Project 23000E or Shtorm is a proposal for a supercarrier designed by the Krylov State Research Center for the Russian Navy. The cost of the export version has been put at over US$5.5 billion, with development expected to take ten years.

The Project 23000E Shtorm is around 50% larger than Admiral Kuznetsov at 90,000 tons. It is 1,128 feet long, which is almost the same as the U.S. Navy’s Nimitz Class. On the other hand, it has a distinctive twin-island layout similar to the British Queen Elizabeth Class. 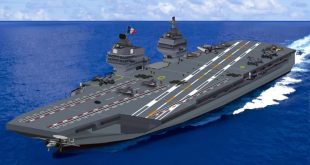