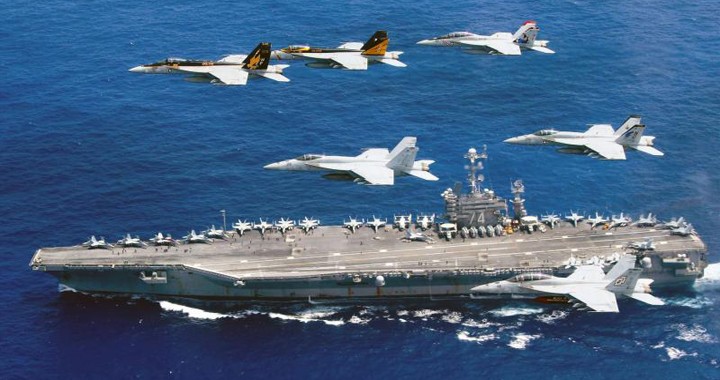 Over 70 years ago, U.S. Navy aircraft carriers supplanted battleships as preeminent warship with their ability to strike enemy warships or land targets hundreds of miles away.

Recently, an increasing number of critics are predicting the end of the aircraft carrier era.

They cite the growing threats from anti-ship missiles, such as China’s DF-21D “carrier killer”.  DF-21D  is a China first ASBM (Anti-Ship Ballistic Missile) with a range of 3.000 kilometres and speed in excess of Mach 10.

They also argue that current carrier strike fighter aircraft and their weapons lack sufficient range to engage targets in a denied/degraded environment.

However, the ASBM threat has to be taken in proper consideration if “mobility” and “power projection” will remain the two key concepts behind the U.S. naval doctrine in the next few years.

Upon reaching a specific area of operations, the ship tends to keep it for several days, “orbiting” in international waters so as unpredictable as possible to avoid exposure to unlikely, but not impossible, extremely difficult long-range ballistic shootings “.

Aircraft carrier proponents argue that a modern U.S. supercarrier uniquely provides a globally deployable U.S. airfield that can rapidly respond to emergent crises and does not depend on the approval of any host nation. While they acknowledge the increased threats to the carrier strike group and its air wing, they argue that introduction of the fifth generation F-35, long-range unmanned carrier-based tankers, advanced weapons and electronic warfare systems, and the employment of new operational tactics will enable the aircraft carrier to remain relevant for the foreseeable future.