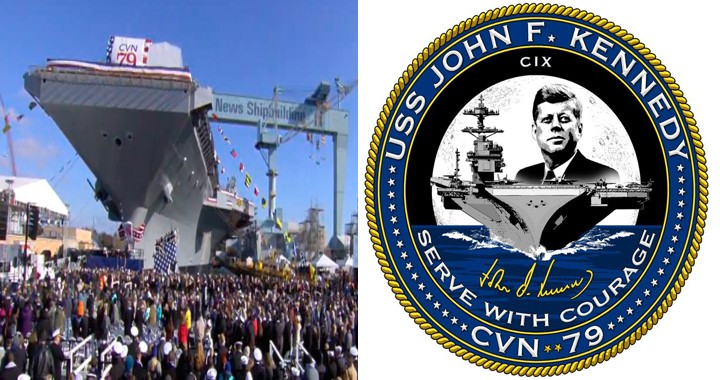 The christening ceremony of the Pre-Commissioning Unit (PCU) John F Kennedy was attended by more than 20,000 members.

CVN 79 is named in honor of former US President John F Kennedy for his contribution to the country and the US Navy. It is the second aircraft carrier to be named after Kennedy, who served as the 35th President of the US.

John F. Kennedy is the second aircraft carrier of the Gerald R. Ford-class, slated to replace USS Nimitz (CVN 68), when that ship is decommissioned.

“This is, I think, one of the most exciting days I’ve had professionally,” Newport News Shipbuilding President Jennifer Boykin told WAVY.com as she beamed with pride.

The ceremony is primarily focused on the former president and his daughter — also the ship’s sponsor — Caroline Kennedy, Capt. Todd Marzano, the ship’s commanding officer, said.

“It’s exciting enough to christen an aircraft carrier, but to be honored with ambassador [Caroline] Kennedy and her family here is just… it’s beyond anything I can describe,” Boykin said.

Tune in tomorrow right here at 10:55 AM ET to watch as the #USNavy christens its newest aircraft carrier, the future #USSJohnFKennedy – https://t.co/esnUpdwRwe pic.twitter.com/PMYslH2sI0

Retired US Marine Corps major general and former Nasa administrator Charles Bolden said: “This vessel is a symbol of our nation’s strength, technical achievement and critical service our men and women provide for this nation and the entire world.

“This incredible ship before us today serves as the biggest instrument of deterrence and carries our nation’s pride and hope for a better world.”

The first steel of the aircraft carrier was cut in 2011. Construction of the ship involved over 5,000 shipbuilders and suppliers from 46 states across the US.

HII noted that the PCU John F Kennedy will be launched into the James River and moved to a pier in the coming weeks.

The ship will undergo further outfitting and testing. The Newport News division is expected to deliver CVN 79 to the navy in 2022.

CVN 79 is the second aircraft carrier to honor President John F. Kennedy for a lifetime of service to the nation. The president wore the uniform of our nation as a Navy lieutenant during World War II and served as the 35th President of the United States, from January 1961 to November 1963.