The new vessels have a hull similar to the Nimitz carriers, but introduce technologies since developed such as the Electromagnetic Aircraft Launch System, as well as other design features intended to improve efficiency and reduce operating costs, including sailing with smaller crews.

The new Ford Class supercarriers will also feature a far more technologically advanced system video system—one that requires no windows or even a camera operator at all.

The old system, which evolved over many decades, had a camera operator inside the windowed room that filmed all the launches and recovered aboard the ship.

The camera was connected to a closed-circuit video network system and much like a television studio camera, it could only look in one direction at a time. Although the technology largely stayed the same from the early 1980s on, its video products, along with other fixed cameras around the ship’s deck, were fed into ever more advanced central interfaces that dispersed the feeds to television monitors throughout the ship. This total system was dubbed the Integrated Launch and Recovery Television Surveillance (ILARTS) system.

The Ford class supercarrier, with its smaller island superstructure, has totally eliminated the Island Camera Room and has replaced it with a distributed aperture remote video system. Called Digital ILARTS, this system does what the old manned camera couldn’t, it stares in every direction at all times.

The island-mounted cameras on the Digital ILARTS system are housed in a pair of enclosures that look a lot like an outside propane heater or street light. Beyond being able to see everywhere at once, day or night, the Digital ILARTS is far more advanced than its predecessor.

If everything works as advertised, this will be a massive upgrade over the old system and will be a huge boon for anyone looking to monitor, dissect, or review deck operations. It also goes with a growing trend of putting distributed aperture camera systems aboard seagoing vessels to drastically enhance situational awareness and tactical effectiveness. 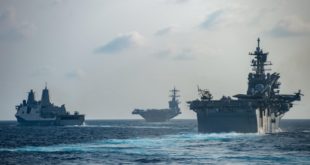