F-14 Vs F-15: The Aircrew’s Perspective on Tomcat vs Eagle 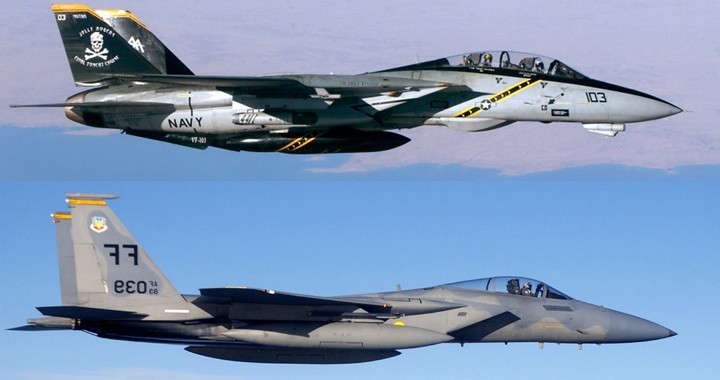 The F-14 Tomcat and the F-15 Eagle are two of the best fighters ever built.

Even if until today a real Tomcat Vs Eagle engagement with live weapons fired has never taken place since the prototypes made their first flights (just two years apart) comparisons have been made between these two iconic aircraft.

Related Link: The story of F-14 Driver who scored 2 simulated gun kills on 3 USAF F-15s for 2 times in the same mission

Having spent his entire career flying USAF F-15Cs in Europe, Robert “Scout” Winebrenner never flew the Tomcat but during the 1980s he had the opportunity to fly Dissimilar Air Combat Training (DACT) with 6th Fleet F-14s in the Mediterranean. 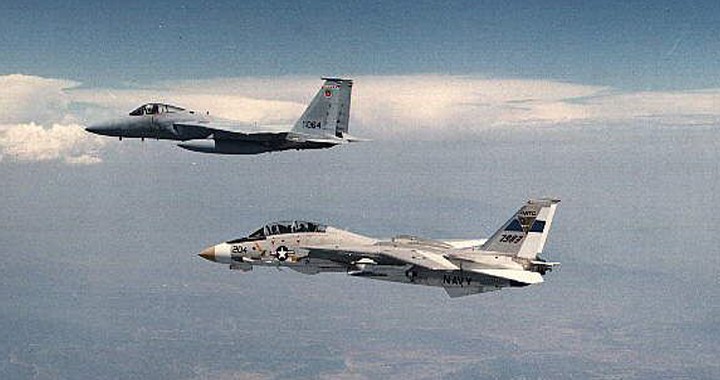 As he explains in Issue 13 “Grumman F-14 Tomcat” of Aviation Classics magazine, innumerable discussions have been made about which was the better fighter

Although both the aircraft replaced the F-4 Phantom, the F-15 and the F-14 were built to satisfy totally different operational requirements, hence the two fighters could be more or less effective in the different missions they could have performed because of their respective strength and limitations.

For instance, the F-14 was the best aircraft to defend U.S. Navy aircraft carriers against a multiple target engagement. In fact thanks to its beyond visual range (BVR) capabilities and assisted by E-2C Hawkeyes, the Tomcat could inflict severe losses to an incoming enemy bombers formation.

By contrast, the constant mixing of friendly and enemy aircraft typical of a Central European Defensive Counter-Air (DCA) would have rendered the Phoenix unusable in most of the engagements because of the dynamic environment faced by the fighters. Moreover, the agility deficit of the then TF-30 powered F-14 could have caused problems during the several dogfights that crews could have faced in such a complex scenario.

Another role where the Tomcat could be very effective was a sweep mission was BVR missiles could be freely shot: this would be the case of a sweep ahead of a carrier-based attack package, a kind of mission where the F-14 would have been able to launch its AIM-54s without limitations due to the absence in the area of any friendly aircraft. Actually, the mission would have been also accomplished also in the case the enemy aircraft had left the area refusing to engage the Tomcats.

On the contrary, Winebrenner says that in a Force Protection / Escort mission, where the fighters cannot commit on hostile until they were within 20 miles, many Phoenix advantages are negated and the F-15 good manoeuvrability was needed to better face enemy aircraft. But despite the fact the Eagle’s sensors were better to sort out friendlies from enemies, if the BVR Rules of Engagements (ROE) were so restrictive that visual identification (VID) was required for weapons delivery, the Tomcat armed with Sparrows and Sidewinders was better suited since it owned the Television Camera Set (TCS), a chin-mounted optical sensor that could be slaved to radar line of sight. So if needed, the F-14 crew could lock on to a target and (if VID was required for the engagement) zooming in with TCS to get a very early look at the potential target. As explained by Scout, the F-15 had nothing like this “It pains me to admit it, but we were flying around with rifle scopes strapped on to the Head-Up Display frame, allegedly boresighted” and achieving an early VID “was not that easy. Maybe other pilots thought it was great, but I didn’t. It was not user-friendly by any stretch of the imagination.”

So to the question to which was the better fighter, Winebrenner answers that depend on the mission, on the ROE, on the threat. And if the F-14 didn’t possess the close range dogfighting agility of the F-15, the Tomcat ability to launch 1000 lb air to air missiles with 135 lb warheads was impressive. And as Scout explains, claiming that a missile is easy to evade is much easier than actually evading it, especially if it is coming at you from above at Mach 5 and you cannot see it.

From the late 1980s, both aircraft have received several improvements: so if the F-15C could finally engage multiple targets thanks to the introduction of the AIM-120 AMRAAM, the thrust of the General Electric F110-GE-400 turbofans boosted the performance of the F-14B and D models.

Nevertheless as explained by LCDR Joe “Smokin” Ruzicka, who was the Radar Intercept Officer (RIO) to fly the last F-14 Demonstration before the Tomcat was retired by the U.S. Navy in 2006, to Tyler Rogoway for foxtrot alpha, the worst adversary for the F-14 in a mock dogfight remained the F-15C, since the Eagle was “more capable in that area than the Tomcat.

You have to remember, the F-15C has a 9G turning capability versus 6.5 to 7.0 G for the Tomcat. But the F-15C is strictly air-to-air, so there are trade-offs in capabilities between the two jets. They don’t drop bombs, we do. Another thing: a lot of success in BFM has to do with the pilot’s ability to maximize the jet’s capability. Fortunately, the best-trained guys who fly the F-15C are on our side!”

Previous Indonesian Air Force to fly fighter jets to wake people for ‘sahur’ during month of Ramadan
Next China tried to block PHILIPPINES military facilities over fears U.S. could use them