How F-35 will prove to be a White Elephant for India?

How F-35 will prove to be a White Elephant for India?
(Problems with its software laid threadbare) 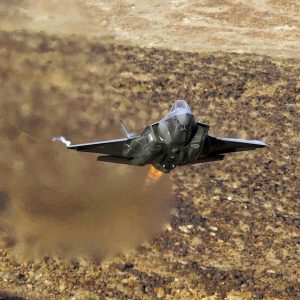 Britain has received 14 F-35B jets out of a total of 48 it has committed to buying.

The plans are to eventually acquire 138 jets at a spending of roughly 12 billion dollars.

If the support costs over the jets’ lifetime were to be added, the spend will easily be trebled.

Already people are questioning whether it is worthwhile to park billions of dollars in a project that is facing one problem after the other.

India on the other hand just has had a poor experience with European atomic clocks which have been failing one by one onboard its satellites.

Now ISRO is set to launch its own atomic clocks in December.

Without accusing anyone in particular, in a dog-eat-dog world of foreign corporates, sabotage can never be ruled out, guided party by lust to make easy money and partly to deny the country key technologies despite it having paid handsomely for them.

So the question arises that will it be ill-advised if India were to acquire F-35 Jets. For that we need to look into the nature of problems F-35 is facing as to how serious they are.

Problems with the software  of F-35

To begin with, F-35s are not running a single software. Different F-35 Jets are running so many different versions of their core software, that a US Department has warned of encumbering problems leading to delays in flight tests.

In the past, developers have addressed thousands of bug reports filed by pilots and engineers.

Software aboard Mach 1.6 stealth jets is identified by Block number.

It has been through tens of iterations, with Block 3F the latest version-having been through more than 30 versions by autumn last year.

US Department of Operational Test and Evaluation (DOTE) reported in January that “the final” Block 3FR 6.3 software released in October

2017 has already been superseded by two additional software updates.

In fact, more software patches will likely be needed as the programme seeks to resolve ongoing problems with weapons and avionics

How F-35 will prove to be a White Elephant for India?

Another problem that trials showed is with  AIM-120 AMRAAM missile

The missile cannot currently be used to its full potential by the supersonic stealth jet.

After 6 test firings, the pilots are still finding deficiencies in the ability of F-35s to employ the AIM-120 weapons.

one more problem being faced by F-35 is its inability to communicate with its unique  PORTABLE MEMORY DEVICES (which are not USB sticks) at a reasonable speed, so much so that pilots frequently chose to manually enter mission planning data in the cockpit. Despite recent efforts to speed this up with “updated transfer devices”, Portable Memory Device still takes too long and is problematic.

On the good side, the  Autonomous Logistics Information System (ALIS) bundled with the F-35 is now running on Internet Explorer 11, after techies completed development of ALIS 2.0 and 2.5 in late 2017 to address some deficiencies. (ALIS tracks every single component on the aircraft and appears to be the ultimate vendor lock-in software package).

However, this good news also comes with a pinch of salt as DOTE Report says that “ALIS version 3.0 is necessary to provide full combat capability…. the programme deferred to ALIS 4.0 capabilities previously designted for ALIS 3.0.”

ALIS 4.0 is scheduled for late 2018, but the developers are unlikely to meet the schedule.

That is not all. Using an ALIS in laboratory is not the same as using it actually on-board F-35. Fleet Personnel used it in ways that laboratory testers had not.

Problems other than the Software :

Britain’s experience shows that problems it is facing with with its F-35s are not restricted to software alone.
1. An F-35B used for ground testing is unable to start third-life structural testing due to extensive repairs that were required to complete second-life testing.

2. Another F-35B used for tests had to be given unique “horizontal tail thermal barrier coatings” so that it could be flown in full afterburner for long anough, to collect necessary strain load data.

3. Yet another F-35B in flight sciences testing developed cracks which delayed testing.

4. DOTE warns that F-35B is though designed for a service life of 8000 hours, but failures during testing mean, it may be lesser even with extensive modifications to strengthen the aircraft.

So it means if India opts to go for F-35, it has to be ready for one issue or the other to keep cropping up and dollar bill to continue to rise as a consequence.

The other option can be to wait for development work going on F-35 to mature and settle at an acceptable level, then take a call and depend upon the wisdom of the manufacturer that it has offered the most advanced software package that is bug free, and that it shall readily pitch in if still a minor issue crops up.