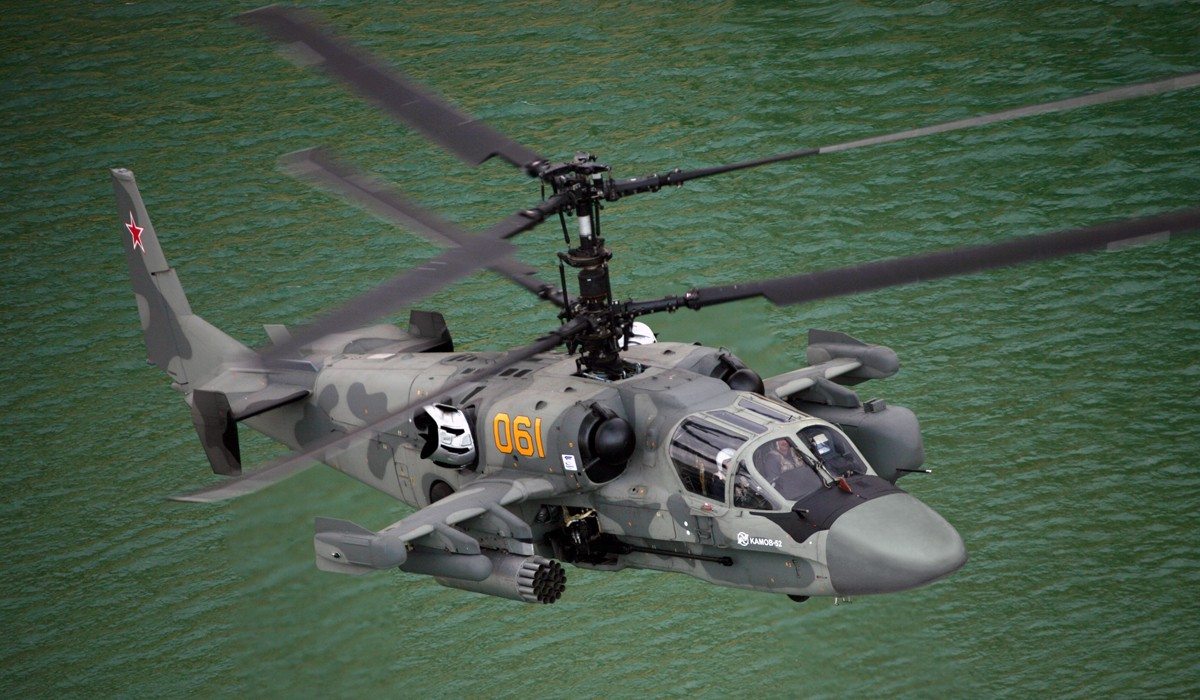 Ka-50 ‘Black Shark’ was a single seat helicopter and the world’s first operational helicopter with a rescue ejection system.
In the early 1980s, while comparative tests of Ka-50 prototype and the Mi-28 were being conducted, the Kamov design team came up with a proposal to develop a dedicated helicopter to conduct battlefield reconnaissance, provide target designation, support and co-ordinate group attack helicopter operations. However, the economic hardships that hit Soviet Union in the late 1980s hampered this new development program.

As an alternative, Kamov’s Designer General decided to choose a modified version of Ka-50 on which to install the reconnaissance and target designation system. The modified version required a second crew member to operate the optronics/radar reconnaissance suite. Kamov decided to use side-by-side seating arrangement. This twin-seat version was designated Ka-52 Alligator.

In comparison to the original Ka-50, Ka-52 has a ‘softer’ nose profile and a radar system with two antennas—mast-mounted for aerial targets and nose-mounted for ground targets. Day-and-night TV/thermal sighting system in two spherical turrets (one over the cockpit and the second under the nose) are also fitted. The Ka-52 has the side-mounted cannon of the original Ka-50. It features six wing-mounted hardpoints compared to four on the Ka-50.

To keep the weight and performance on par with that of the Ka-50, some sacrifices were made to the design; the amount of armour and the capacity of the cannon magazine/feed were reduced. Also some flight parameters deteriorated; rate of climb became 8 m/s (vs. 10 m/s of Ka-50), maximum positive load factor is 3.0 g. But most of the problems were solved by installing the new VK-2500 engine. The Ka-52 is approved for day, night and adverse weather conditions. Russia shall eventually have 140 of Ka-52 helicopters.

Egypt’s helicopter is a modified version of the basic Ka-52 Alligator that serves in the Russian Air Force. Unlike the basic model, the Egyptian Ka-52 utilizes anti-corrosion materials and has a reinforced fuselage structure. It received new landing gear and wheels, designed for the increased takeoff weight of the helicopter. The Egyptian model features updated avionics and a new cooling system for operating in hot climate. Dmitry Rogozin, Deputy Prime Minister of Russia on defense and space industry, proposed to name it the “Nile Crocodile”

The helicopter is equipped with the new OES-52 electro-optical observation and laser targeting system, replacing the standard GOES-451 mounted under the nose. The new optronic system began development in 2011 as a collaboration between Kamov and Sagem, and is based on the French company’s STRIX sighting System. The OES-52 provides greater range of target detection and recognition.

The helicopter features the Arbalet-52 Dual-band coherent pulse radar, which has an Earth mapping range of 32 km and a detection range of 25 km for ground targets and 15 km for aerial targets.

The Nile Crocodiles will receive President-S airborne defense systems for protection against guided missiles. The system includes both radar and laser warning receivers, MAW sensors, chaff/flare dispensers, in addition to ECM and DIRCM jammers. Egyptian Ka-52s feature two new DIRCM sets installed on either side of the fuselage, which are different from the standard L370-5 sets.

Egypt plans to arm its Ka-52s with Russian anti-tank guided missiles. The Air Force has chosen two types of missiles; namely the Vikhr and the Ataka laser-guided missiles