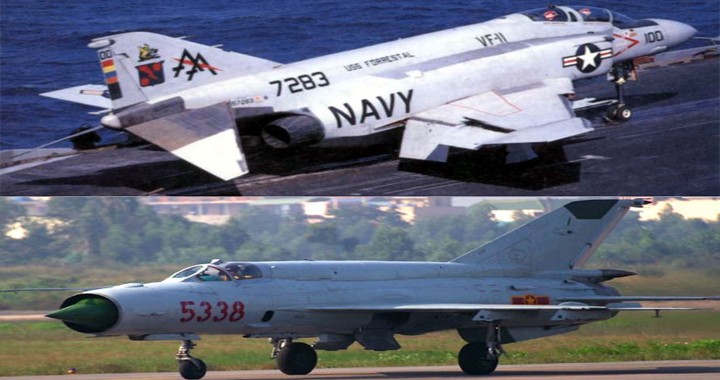 The operation was a deception-based mission during the Vietnam War devised to lure fighter aircraft of the Vietnam People’s Air Force (VPAF)- into battle where the odds were stacked against the defenders. The Mission was planned in response to North Vietnamese tactics during the Operation Rolling Thunder aerial-bombardment campaign wherein MiGs were used to attack heavily loaded fighter-bombers while circumventing their fighter escorts. The mission featured fighter planes following the typical flight paths of bombers in order to lure enemy aircraft into attacking.

Bolo pitted the F-4 Phantom II multirole fighter against its rival, the Mikoyan-Gurevich MiG-21, and was considered to be one of the most successful combat ruses of all time, eventually prompting VPAF pilots and strategists, as well as Soviet tacticians, to re-evaluate the tactics and deployment of the MiG-21.

The F-4 Phantom II had been in Operational service with the USAF since 1964. The latest fighter in American service, the Phantom had powerful engines, excellent handling, and an Air-to-Air configuration of eight Air-to-Air missiles. However, the Phantom suffered from one critical armament weakness- The lack of an internal cannon, as its original conception as a fleet defense interceptor dictated that Air combat would occur beyond visual range with radar-guided missiles. It was also a large, heavy fighter, with high wings loadings that degraded its performance in High-G turns, and with engines that tended to produce a large amount of smoke, making it highly visible in combat.

The Phantom’s primary adversary during this engagement was the Soviet-Built Mikoyan-Gurevich MiG-21, NATO reporting name ‘Fishbed’, a small fighter designed as a short-range interceptor, a role that perfectly suited its used by the VPAF. Armed with two Vympel K-13 Missiles (Known to US pilots by their NATO designation “Atoll”), the MiG-21 had rapid acceleration, was agile at supersonic speeds and at high altitudes, and significantly outperformed its primary target- the F-105 Thunderchief- in all flight regimes.

“Operation Bolo” was created to deal with the new MiG threat. Since October the F-105s had been equipped with QRC-160 radar jamming pods that had virtually ended their own losses to surface-to-air missiles but had shifted SAM attacks to the Phantoms, unprotected because of a shortage of the pods. Rules of engagement that had previously permitted the Phantom MiGCAP to escort the F-105s in and out of the target area had been revised in December to limit MiGCAP penetration to the edge of SAM coverage.

MiG interceptions had consequently increased, primarily due to MiG-21s using high-speed hit-and-run tactics against bomb-laden F-105 formations, and although only two bombers had been lost, the threat to the force was perceived as serious. The bombing of North Vietnamese airfields was still forbidden at the start of 1967, and 8th TFW wing commander Col. Robin Olds proposed an aerial ambush as the best means of mitigating the threat.

Olds assigned the planning of Operation Bolo to a quartet of Veteran junior officers in his wing: the wing tactics officer Capt. John B. Stone, 1st Lt. Joseph Hicks, 1st Lt. Ralph F. Wetterhahn, and Maj. James D. Covington. Working under the tightest security, the pilots assigned to fly the mission would not be briefed until December 30th.

The planners determined that if the MiGs reacted, their fuel endurance from takeoff to landing would extend to a maximum of 55 minutes. Arrival times of the Phantoms flights over the targeted airfields were set five minutes apart to ensure continuous coverage and maximum opportunities for engagement in the target area, and to attempt to run surviving MiGs out of fuel preventing them from landing. The mission was also planned so that no other US aircraft would be present, allowing the first three flights of Phantom “missile free” engagement without having to first identify the target as required by the Seventh Air Force rules of engagement.

Everything hinged on getting the MiGs airborne; if they didn’t take the bait, then they plan would not come to fruition. In order to deceive the North Vietnamese, the west force had to fly the same ingress routes, altitudes, and speeds as the F-105, use the same air refueling tanker tracks and altitudes, and use F-105 jargon in voice communications. (However, to Old’s dismay, the flights were still assigned callsigns of MiGCAP’s throughout the war, which were the names of American-made automobiles: Olds, Ford, Rambler, Lincoln, Tempest, Plymouth, and Vespa.)

The Phantoms were fitted out with the QRC-160 jamming pods normally carrier only by the F-105s, so that their electronic signature would be the same, and the Phantoms would also fly the inflexible line-abreast pod formations used by the F-105s to maximize pod effectiveness.

The mission was delayed because of bad weather and rescheduled for January 2. The mission launched from Ubon that afternoon after another hour’s delay, and Olds, leading the first flight, arrived over Phuc Yen Air Base at 1500 local time. Flying southeast on the ingress route used by F-105s, the mission drew no defensive reaction, and Olds found that a floor of thick clouds blanketed the area below, concealing any view of MiGs taking off.

Unknown to Olds, the North Vietnamese GCI controllers had delayed takeoffs by approximately fifteen minutes because of the overcast. He reversed course and flew to the northwest. When three minutes had passed without contact, and with Ford Flight almost in the area, he canceled the missile-free option. Just as Ford Flight arrived in the target area, the first MiG emerged from the clouds below.

The first attack came as the second flight of Phantoms was also entering the area. Olds’ flight immediately dropped fuel tanks and lit afterburners to engage three MiGs that, although apparently emerging at random, actually had been directed to have the first appearance at the flight’s “six” (rear) and the next two moments later at its “ten” (left front), presenting one MiG with a tail-shooting solution and tactical surprise. All three flights that engaged MiGs later reported encountering these tactics.

Olds 02, flown by mission planner Ralph Wetterhahn, scored the first kill by shooting the MiG with an AIM-7 Sparrow as Olds 01, flow by Col. Olds, fired three missiles that failed either to launch or guide. Olds stated:

“The battle started when the MiGs began to get out of the cloud cover. Unfortunately for me, the first one appeared in my ‘six o’clock’. I think it was more an accident than a planned tactic. As a matter of fact, in the next few minutes, many other MiGs started to exit from the clouds from different positions.

I was lucky. The flight behind me saw the MiGs and tried to divert its attention. I broke to the left, sharply enough to get away of his line of fire, hoping that my wingman would take care of him. Meanwhile, another MiG came out of the clouds, turning widely about my ’11 o’clock’ at a distance of 2,000 yards. He went into the clouds again and I tried to follow.

A third enemy plane appeared in my ’10 o’clock’, from the right to the left: in simple words, almost in opposite direction. The first MiG zoomed away and I engaged the afterburner to get into an attack position against this new enemy. I reared up my aircraft in a 45-degree angle, inside his turn. He was turning to the left, so I pulled the stick and barrel-rolled to the right. Thanks to this maneuver, I found myself above him, half upside down. I held it until the MiG finished his turn, calculating the time so that, if I could keep turning behind him, I would get on his tail, with a defection angle of 20 degrees, at a distance of 1,500 yards. That was exactly what happened. He never saw me. Behind and lower than him, I could Cleary see his silhouette against the sun when I launched two Sidewinders. One of them impacted and tore apart his right wing.”

Ford flight, led by 8th TFW Vice Commander Colonel Daniel “Chappie” James, Jr. entered the target area at 1505, just as the MiGs began to engage, and James radioed a warning to Olds. Though he did not score a victory himself, James witnessed the victory made by his wingman, Captain Everett T. Raspberry:

“At 15:04 my flight was attacked by three MiGs, two from the ’10 o’clock’ and one from the ‘6 o’clock’. Initially I didn’t see this last one because I had been concentrating on those approaching head-on. My WSO excitedly warned me about this rapidly approaching MiG, which was within firing range of my #3 and #4. I hesitated a while before interrupting my attack against the two MiGs in front, because I had seen the ‘Olds’ flight passing below us a few seconds before. I thought that the plane seen by my WSO could be one of them. Despite, I suddenly turned left and then right, and caught sight of the third MiG. I ordered to my number 3 and 4 to break right. As they did so, the MiG broke left for some mysterious reason and for a split second we were side by side. We were so close that, besides the red stars in his wings, I could Cleary see the pilot’s face. I began a horizontal barrel roll to get away from him and into an attack position, once in position, I launched a Sidewinder. The missile missed because the evading MiG broke left at full throttle. But when he did it, he put himself in the line of fire of my number 2, Captain Everett T. Raspberry. I ordered him to follow the prey, because the two aircraft that I initially saw had been place in my forward sector. I was in an advantageous position, so I fired two AIM-9s against them in a quick sequence, and I turned to place myself as wingman of my #2, Captain Raspberry. {…} I kept on descending beside Captain Raspberry and I remember that I thought that he was still out of the optimal launching envelope. But he performed a barrel roll that placed him in a perfect position again and he launched an AIM-9 which hit against the tail section of the MiG-21. It was shaken violently and later fell in a slow, almost plane spin.”

A North Vietnamese source confirms the loss of only five MiG-21 during Operation Bolo and states that all five pilots bailed out safely:

As the Phantoms landed at Ubon, their ground crews lined the taxiway. As each Phantom passed, cockpits opened, the pilots indicated with upheld fingers the number of kills they’d scored. Of the 16 MiG-21s known to be in the VPAF inventory, 11 to 14 had been engaged on that day (depending on the source), with seven destroyed and two other probably shot down. (by Combies and Maj. Herman L. Knapp, Rambler 03). Years later, Vietnamese government sources admitted that Operation Bolo on January 2 was one of the worst days for the VPAF during the war. The VPAF claimed to have lost five MiG-21’s, with no enemy kills to claim.

The success of Operation Bolo led Seventh Air Force to plan a similar mission simulating an RF-4C photo reconnaissance mission. The immediate reaction to Bolo by the VPAF was to challenge the daily “recce” mission on the two days immediately following Bolo, in each case causing the mission to be aborted. On both January 5 and January 6, a pair of 555th TFS F-4C Phantoms, flying a close formation to appear as a single target on North Vietnamese radar, flew the high-speed profile. On the second day, intercepted by 4 MiGs, they again surprised and shot down two during the encounter, with Crab 01 (Capt. Richard M. Pascoe and 1st Lt. Norman E. Wells) and Crab 02 (Maj. Thomas M. Hirsch and 1st Lt. Roger J. Strasswimmer) each scoring a kill.

For the North Vietnamese (and their Soviet allies who supplied the MiG-21 aircraft and helped set up the integrated air defense network), the two reverses on January 2 and January 5–6 forced them to disband their assets by grounding the MiGs for several months for retraining and devising of new tactics.