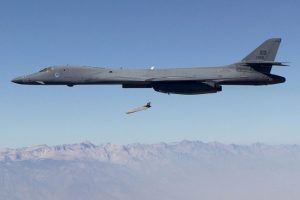 The Pentagon’s used its  New Strike JASSM Missile  First Combat first time in combat  .The missile was used in the Allied Airstrike launched by U.S germany and britain  on Syria’s chemical weapons facilities

The missile is shorter range version of JASSM  which can strike targets with pinpoint precision from hundreds of miles away .It is the first time any JASSM variant was used in combat.The missile is one of the most advanced conventional weapons in the U.S. arsenal

The U.S. Navy and Air Force unleashed 57 long-range missiles at the Barzah Research and Development Center, home to the Syrian government’s chemical weapons development program. Nineteen of the missiles that struck Barzah were JASSM-ER missiles. 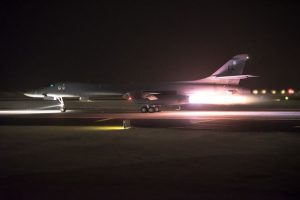 B-1 bomber loaded with JASSM-ER missiles taking off from Al-Udeid Air Base in Qatar to strike targets in Syria.

Once launched from an aircraft, JASSM typically flies a flight path chosen ahead of time, allowing the low-flying missile to mask its approach to target with terrain such as hills, valleys, and mountain ranges. The missile can be programmed to fly around known air defenses such as S-400 “Triumph” radars and missile batteries, using an internal navigation system and jam-resistant GPS to find its way around. Near the target, JASSM switches on its imaging infrared seeker to automatically recognize its target and home in for a kill. JASSM is capable delivering its warhead to within three yards of its target.

JASSM was an excellent missile but a range of 230 miles, coupled with long, looping flight profiles to evade enemy defenses could mean carrier aircraft had to fly relatively close to the target. That could put the aircraft within range of enemy fighter jets or enemy air defenses. Thus was born the AGM-158B JASSM-ER, with -ER standing for “Extended Range”. Using a Williams Intl. F107-WR-105 turbofan engine, JASSM-ER is capable of flying more than 500 miles, increasing the margin of safety for a large bomber or small fighter with two large cruise missiles hanging off its wingtips.

The sophisticated nature of the AGM-158 series missiles (JASSM, JASSM-ER, and LRASM) mean they won’t be used very often. If and when they are used it basically means something very bad has happened. While it’s useful to have such capable missiles in U.S. arsenals, let’s hope they stay there.