Heather Wilson the secretary of the Air Force launched a  Science and Technology 2030 initiative in september last year . This video shows a glimpse of new initiative on which US Air Force Research Laboratory is working right now

US Force is trying to  mount lasers weapons on its fighter jets and other planes . Lockheed Martin was recently awarded a $26.3 million contract to develop lasers for fighter jets.

Till now its  unclear what capabilities a sixth-generation fighter would have, but according to some rumors its could have longer range, larger payloads, and an ability to switch between a manned and an unmanned aircraft. It might also be able to travel at hypersonic speeds, carry hypersonic weapons

Defense News reports that the Air Force hasn’t selected a developer for the F-X, also known as Next-Generation Air Dominance or Penetrating Counter Air, but hopes to put it into service around 2030.

In addition to the F-X, the AFRL video features the Air Force’s Loyal Wingman initiative, in which a manned fighter jet commands and controls a swarm of attack and surveillance drones. 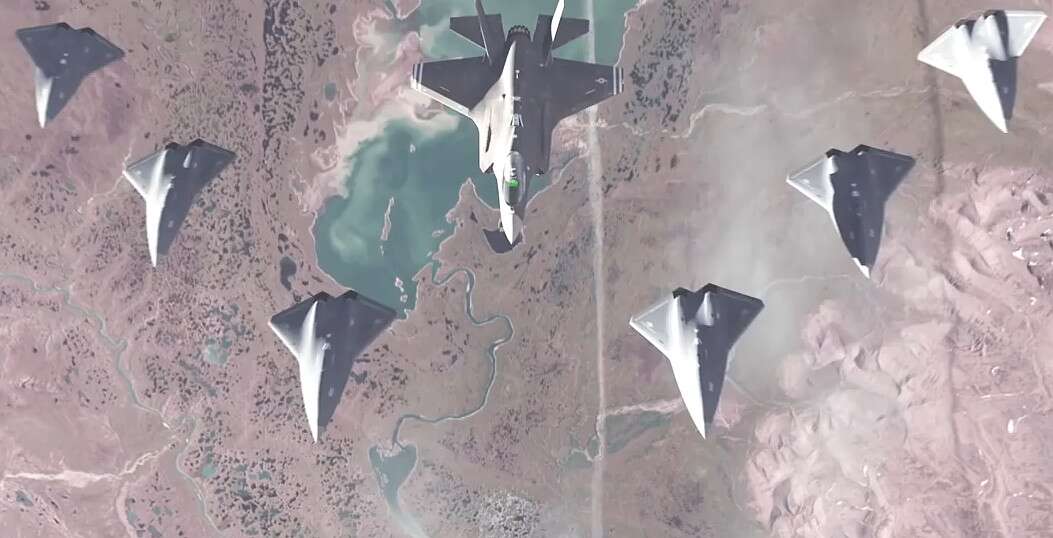 In the video you can see a  F-35A Joint Strike Fighter working together with six stealth unmanned combat air vehicles, or UCAVs. For years now, the Air Force, and AFRL in particular, has been working on this type of manned-unmanned teaming, which it has referred to as the “Loyal Wingman” concept.

In 2015, Lockheed Martin, in cooperation with the CalSpan Corporation, demonstrated the ability of a two-seat Block 50 F-16D Viper to safely fly in formation with a modified unmanned F-16 test bed, known as the Variable stability In-flight Simulator Test Aircraft, or VISTA. At times during that test, known Have Raider, the drone Viper also broke off, followed a pre-determined route independently, and then re-entered formation with the manned aircraft.

Two years later, during a follow on experiment called Have Raider II, the pair of aircraft actually went through the motions of a simulated strike mission. The pilotless F-16 attacked simulated targets on the ground autonomously based on an established set of parameters, but also modified its flight pattern in response to mock threats and other changing environmental conditions.

Kratos recently received approval to export its less advanced UTAP-22 Mako drone, which it has tested in a loyal wingman role in the past with a U.S. Marine Corps AV-8B Harrier, which suggests that there could be more advanced designs from that company or others in a relatively mature state already available to the Air Force. With some notable exceptions, the United States is typically not inclined to make military systems available even to allies that are directly equivalent to its own top-end capabilities.

The March 2018 video shows much more advanced loyal wingmen with completely tailless, low-observable planforms, internal weapons bays, and an in-flight refueling receptacle on top of the fuselage. Both the Air Force and the U.S. Navy have demonstrated the ability to refuel an unmanned aircraft in mid-air and the former service may have actually deployed drones with this capability.

Coupled with mid-air refueling, such a force could potentially penetrate deep into denied enemy areas full of integrated air defenses and advanced hostile fighter aircraft to destroy critical or time sensitive targets. The group would also be able to strike at those defenses, helping open up a safer path for subsequent strikes by more vulnerable non-stealthy aircraft.

In the video, the pilot in the F-35A uses the aircraft’s advance sensor suite to detect a surface-to-air missile site and orders some of his drone companions to attack it with what appears to be a GBU-39/B Small Diameter Bomb (SDB) glide bomb. This combination of a manned low-observable plane directing stealthy UCAVs to hit a target with a stand-off weapon shows just how much distance a pilot might be able to put between themselves and a threat with this operating concept.

Similar operating concepts could apply in air-to-air combat, as well, with the drones acting as missile trucks, engaging targets based on information from the controlling F-35 or another manned or unmanned asset loaded with sensors. It could also potentially help with the Air Force’s chronic pilot shortage by significantly expanding the capabilities a single manned aircraft can bring to bear across a broad area.

It only gets a brief and very narrow interlude in the video, but its important to note that these operations would almost certainly rely heavily on robust data links and other networked communication nodes, in the air, on the ground, and in space to rapidly relay information back and forth between manned and unmanned aircraft and other friendly forces. AFRL’s presentation shows how this might allow headquarters and air operations centers in the ground to monitor a pilots vital signs and life support systems specifically.

This is a particularly important consideration given a growing number of reported cases of hypoxia-like symptoms among aviators across the U.S. military flying a variety of fixed-wing aircraft. Hypoxia refers to a dangerous drop in oxygen getting to the brain, or an outright stop in the flow altogether, which can cause disorientation, blackouts, and even death, and is particularly dangerous for pilots. The Air Force has had to deal with these issues with regards to a wide variety of aircraft, including the F-35, the F-22 Raptor stealth fighter, the A-10 Warthog ground attack aircraft, and the T-6 Texan II turboprop trainer. Being able to keep an eye on these issues remotely could help prevent potentially deadly accidents.

Beyond that, though, networked systems will also give pilots and increasingly detailed picture of the battlefield during actual operations by fuzing together different types of data from various sources. Advanced artificial intelligence may be able to help parse that information, as well, speeding up a pilot’s decision making process by weeding out low-priority data and focusing on the most significant threats.

In the video, the F-35 pilot appears to speak with a disembodied head, which could be a stand-in for an augmented reality communications system with other individuals or represent an artificial intelligence adviser of sorts explaining the situation at hand. There is the implication here that in the future a pilot may be able to issue commands to their networked wingmen using voice commands through this sort of interface, too.

The AFRL video then moves on to a different drone concept, involving a canister-like module that dispenses dozens of small unmanned aircraft that work together as a swarm. The clip shows a humanoid robot pushing the entire system out the back of a C-130-type airlifter, after which a parachute deploys, suspending the system in midair, allowing the tiny planes to break off and go zipping along toward their targets.

At present, the Defense Advanced Research Projects Agency (DARPA), the Pentagon’s top advanced research and development entity, is leading this work as part of a project it calls Gremlins. Still very much in the conceptual stage, the goal for the program is to develop a system that bombers or cargo aircraft, and possibly even fighter jets, can deploy, while a C-130-sized aircraft recovers the unmanned planes after the mission if necessary.

As we at The War Zone have written about in depth many times before, these swarms have the potential to offer intelligence, surveillance, and reconnaissance capabilities over a broad area, as well as the ability to confuse or otherwise disrupt enemy defenses. Depending on their exact size and capabilities, they might also be able to function as munitions themselves or conduct non-kinetic attacks using electronic warfare jammers or other systems.

With that in mind, AFRL itself is working separately on a project called Gray Wolf, which aims to develop a swarming, low-cost cruise missile type weapon. the Air Force hopes it may be able to leverage the same shell to carry different, non-kentic payloads eventually.

How Much It Costs To Fly U.S. Fighter Jets