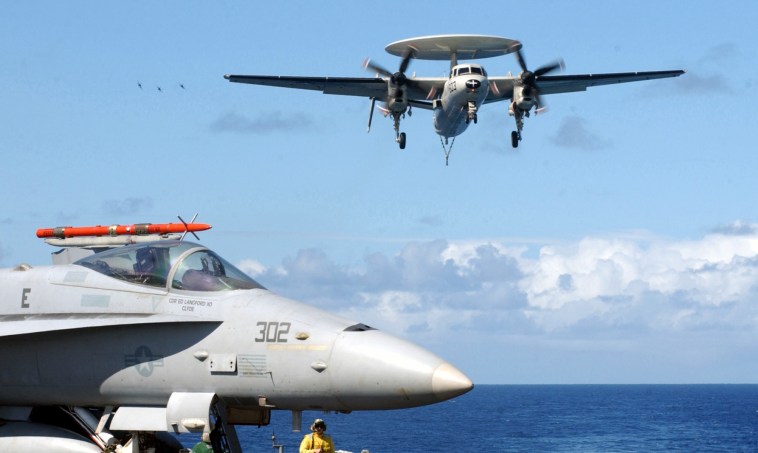 On July 8th 1991, a US Navy Grumman E-2C Hawk-eye early warning and control aircraft was shot down by a US Navy McDonnell Douglas F/A-18C Hornet approximately 40 miles southeast of Cyprus in the eastern Mediterranean Sea.

The Hornet utilized its M61A1 20 millimeter Vulcan cannon to splash the Hawkeye. There were no casualties.

Forrestal was in the area as part of the forces committed to Operation Provide Comfort.

The aircraft’s on-board fire suppression systems were unable to extinguish the fire. With few options available to them and the Hawkeye’s crew in grave danger, a decision had to be made quickly.

The Hawkeye, AKA Hummer, carried a crew of five- pilot and copilot along with three systems operators/controllers.

Then a VFA-132 Privateers F/A-18C Hornet gunned the Hawkeye down. All five crew members were rescued with no significant injuries by HS-15 Red Lions Sikorsky SH-3H Sea King helos from the Forrestal and by the Ticonderoga-class guided missile cruiser USS Yorktown (CG-48).