South Korea’s Korea Aerospace Industries (KAI) is expected to unveil the first completed prototype of its KF-X fifth-generation twin-engine fighter jet shortly, with the aircraft having begun construction in September 2020.

Korea Aerospace Industries (KAI) has issued an image of the first KF-X fuselage, which is undergoing assembly in the company’s Sacheon factory.

The emergence of the KF-X fuselage came one month after GE Aviation confirmed that it had shipped the first F414 engine for the type. The US company will deliver 15 F414 flight test engines by 2021.

Reflecting the limitations of South Korea’s industrial base, the KF-X is expected to rely on a number of foreign technologies – ranging from European Meteor air to air missiles to Israeli Terrain Following-Terrain Avoidance (TF/TA) systems and American F414 engines.

The fighter’s design places a strong emphasis on stealth capabilities and will integrate indigenous derivatives of the Taurus ‘bunker buster’ cruise missile which are currently deployed by Korean F-15K strike fighters.

South Korea has had prior success developing a fighter with the F/A-50 program, which has seen combat in Iraq and the Philippines with formidable results. The jet’s trainer variant the T-50 has been popular across much of the world and is considered the most capable trainer in the world developed outside China in terms of combat capabilities.

Research and development for the KF-X have cost approximately $7.9 billion – the highest for any fighter of its generation completed outside the United States.

South Korea is expected to be one of just five countries to develop a fifth-generation fighter, only the U.S., Russia, and China has yet to develop aircraft with such capabilities.

These countries’ aircraft first entered service in 2005, 2017, and 2020 respectively, and tailing South Korea’s KF-X another potentially promising program is being pursued jointly by Pakistan and China under Project AZM.

Turkey has also looked to develop such an aircraft, although it’s very limited technological base and lack of significant experience in the field of military aviation mean the goal to develop a jet that can compete with foreign designs is unlikely to be seen through.

The KF-X is expected to be exported as a low-cost platform which will be particularly attractive due to its low operational costs, with many of the clients which purchased the F/A-50 and T-50 expected to show interest in the aircraft. In Korean service, the aircraft is expected to replace F-4E Phantom units and a significant portion of F-5E and F-16C units.

KAI had previously stated that the twin-engined aircraft, development of which began in 2015 for the Republic of Korea Air Force (RoKAF), would be unveiled to the public in April 2021. Janes understands that the prototype is expected to conduct its first flight in 2022.

The aircraft, which is expected to be produced in both single- and tandem-seat variants, will feature three hardpoints under each wing for weapons and/or external fuel tanks and will also be capable of carrying four missiles under the fuselage, according to KAI. 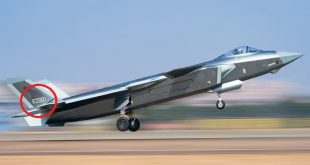 A J-20 with serial number 62001, indicative of service in an active combat unit at …