The J-20 is designed as an air superiority fighter with precision strike capability; it descends from the J-XX program of the 1990s.

The J-20 made its maiden flight on 11 January 2011 and was officially revealed at the 2016 China International Aviation & Aerospace Exhibition.

The aircraft entered service in March 2017 and began its combat training phase in September 2017. The first J-20 combat unit was formed in February 2018.

The J-20 is the world’s third operational fifth-generation stealth fighter aircraft after the F-22 and F-35.

Although Chinese sources had announced that the country had made significant progress in developing a fifth-generation fighter in 2010, these reports were widely disregarded in the Western world on the basis that the country’s defence sector was supposedly not sophisticated enough.

Western analysts instead speculated that the new Chinese fighter would be a much less advanced ‘4+ generation’ aircraft similar to the European Eurofighter or French Rafale – which were far behind the fifth generation in terms of performance and sophistication.

The public unveiling of the J-20 and official first flight were conducted during a visit by U.S. Defense Secretary Robert Gates to China, which was widely interpreted as a show of force in the wake of the Barak Obama administration’s ‘Pivot to Asia’ initiative aimed squarely at Beijing.

Referring to the Chinese leader, Gates stated at the time: “I asked President Hu [Jintao] about it directly, and he said that the test had absolutely nothing to do with my visit and had been a pre-planned test.”

Gates downplayed China’s ability to develop or operate a fifth-generation fighter, and amid widespread speculation in the West that the fighter was no more than a technology demonstrator, the defense secretary predicted that the J-20, if indeed genuine, would not become operational before 2020.

China’s Air Force had previously acquired Soviet built Su-27 heavyweight air superiority fighters of the fourth generation from 1992, which were designed specifically to take on the U.S. Air Force’s own elite heavyweight the F-15 Eagle and were considered overall more capable.

While the Su-27 was subsequently produced under license in China and vastly improved, the U.S. inducted a new generation of heavyweight fighters into service from December 2005 with the introduction of the F-22 Raptor. With the F-22 designed specifically to go head to head with the Su-27, China’s J-20 program allowed its Air Force to move forward a generation and go up against the Raptor on favorable terms.

The J-20 was the world’s second heavyweight fifth-generation fighter to enter service and joined China’s Air Force in March 2017. High-end technologies developed for the fighter have helped modernise other aircraft in the Chinese fleet such as the J-10 and J-11 platforms – with the designs since having been upgraded to the J-10C and J-11BG standards.

Among the J-20’s most outstanding features, the fighter’s radar-evading stealth profile is considered second only to that of the F-22 among manned fighters making it difficult to target at medium and long ranges.

Distributed aperture systems for greater situational awareness and helmet-mounted sights to make better use of short-ranged missiles both give it significant advantages in short-range advantages over its American rival, with the Raptor lacking similar technologies.

The J-20’s PL-15 long-range air to air missiles use AESA radars making them more precise and more difficult to jam than the AIM-120C and D missiles used by American fighters, which are still guided by much older PESA radars.

Unlike the F-22, which due largely to excessive operational costs saw orders given to terminate production less than four years after entry into service, the J-20 is expected to remain in production for many years to come. It has been widely speculated that a twin-seat variant of the fighter, and a variant with a much larger sensor suite to serve as an airborne early warning jet, could be unveiled in the coming years.

Other improvements have included the recent integration of WS-10C engines, which have a similar but slightly lower power output than the F119 powering the F-22, with these expected to be replaced before 2025 by the WS-15 which has a much higher power output than either.

A new enhanced variant of the J-20, the J-20B, notably entered serial production in 2020 with many more incrementally more sophisticated variants expected to follow. The aircraft is currently being produced at a rate of around 50 per year, with over 150 thought to be either in service or in testing. 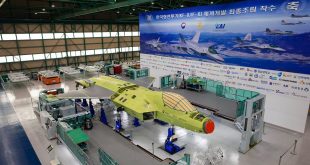 KAI has begun the final assembly of the first KF-X prototype, which is expected to …