Originally designed for the U.S. Air Force, the F/A-18 served for 36 years. The fighter was replaced by both the F/A-18E/F Super Hornet and the F-35C

The aircraft, BuNo 163506 modex AD-300, was assigned to VFA-106 Gladiators in 1988 and remained with the squadron for its entire 31 years of service. After this final flight, it will be officially removed from the US Navy’s inventory and will begin its decommissioning phase, where all the usable parts are removed, before facing the final demolition.

Strike Fighter Squadron 106 (VFA-106) is the Navy’s East Coast Fleet Replacement Squadron, which trains naval aviators to fly the F/A-18 Super Hornet. Before this last flight it operated a mixed fleet of F/A-18C/D Hornets and F/A-18E/F Super Hornets. The Gladiators are also one of the squadrons that made up the US Navy’s Tac Demo Teams, together with the Flying Eagles of VFA-122 out of NAS Leemore, California.

This final F/A-18C flight of the Gladiators comes after the type’s last flight and retirement from the last deployable Legacy Hornet squadron, VFA-34 Blue Blasters, on Feb. 1, 2019 at NAS Oceana. During the last year, VFA-106 has handed over about 50 F/A-18 Hornets to various Navy Reserve and U.S. Marine commands, according to the Navy’s statement. As our editor David Cenciotti wrote back in February:

Although they will be officially retired in a matter of days, some F/A-18A+ Hornets (where “+” designates aircraft equipped with AN/APG-73 radars instead of the original AN/APG-65) will continue to serve in the fleet adversary support role with the Reserve as part of VFC-12 from NAS Oceana and VFA-204 from NAS New Orleans Joint Reserve Base. The Blue Angels will also continue flying their Legacy Hornets while transitioning to the Super Hornets.

“Legacy Hornets” remain in service with the U.S. Marine Corps that plans to fly the F/A-18Cs until they are replaced by the F-35B STOVL variant Lightining II stealth aircraft.

Some of the Legacy Hornets that were not transferred to other commands have been delivered to Davis-Monthan AFB, where the aircraft will be kept in storage by the 309th Aerospace Maintenance and Regeneration Group (AMARG) at the local “Boneyard”.

In fact, some of the U.S. Navy F/A-18A+ and C in better conditions have already been delivered to Davis-Monthan AFB, near Tucson, Arizona, where the aircraft will be kept in storage by the 309th Aerospace Maintenance and Regeneration Group (AMARG) at the local “Boneyard”: they will be cocooned in special materials just in case someone needs them to be put back into service. Something that is useful every now and then. For instance, back in 2016, the U.S. Marine Corps pulled some 30 Legacy Hornets from AMARG and rushed them to service in order to complement its fleet active F/A-18A/B/C/Ds. 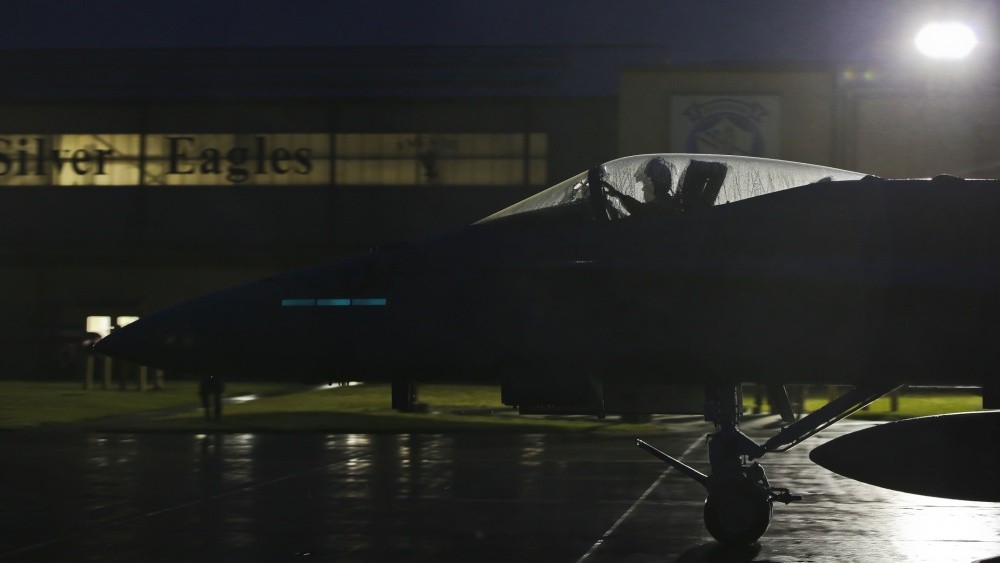 The F/A-18 Hornet was developed in the late 1970s as the YF-17 Cobra, a competitor for the U.S. Air Force’s Lightweight Fighter program. After losing the competition to the F-16 Fighting Falcon, aerospace giants Northrop and McDonnell Douglas teamed up to create a carrier-based version. The result was the F/A-18 Hornet. The Hornet, designed to perform both air-to-air and air-to-ground missions equally, was the first fighter to include both the “F” for fighter and “A” for attack designations in its tit

The Hornet joined the fleet in 1983, replacing F-4 Phantom and A-7 Corsair fighters in Navy and Marine Corps service. The initial -A model gave way to the improved -C model, and in the 1990s the Navy introduced a larger, heavier version, the F/A-18E/F Super Hornet. The Hornet’s first combat mission was Operation El Dorado Canyon, the 1986 air raid on Libya. The multi-role fighter has participated in every conflict since, from 1991’s Operation Desert Storm to the air campaign against the Islamic State.

The retirement of the F-14 Tomcat in 2006 left the Hornet/Super Hornet the only U.S. Navy fighter jets operating from aircraft carriers. The Hornet remained in Navy service longer than originally planned, thanks to the technical problems with the new F-35C Joint Strike Fighter. Today, the fighter complement in a typical carrier air wing consists of four Super Hornet squadrons, a mix that will eventually transition to two squadrons of Super Hornets and two squadrons of F-35Cs.

The Navy held a retirement ceremony for the Hornet in February 2019 but a handful of the planes remained flying. The Navy’s Blue Angels still fly about a half dozen F/A-18s but will trade them in for early model F/A-18E/F Super Hornets in 2021. The Hornet also flies with the U.S. Navy Reserves as an aggressor aircraft and is scheduled to fly with the U.S. Marine Corps until 2030.