In our old article, we have shared with you the concept of False Canopy and addressed the question that Why A Fake Canopy Painted On Underside Of Fighter Jets?

In this article, we will share with you An interesting account released by an experienced F-15c Eagle driver.

Royal Canadian Air Force (RCAF) CF-18s feature several differences compared to standard F/A-18As, like a bright identification spotlight into the port fuselage just forward of the cockpit, a different ejection seat and a fake cockpit outline painted on the bottom.

The latter was considered a great idea by the U.S. Air Force (USAF) F-15 pilots of the units stationed in Europe, that during the Cold War flew many dissimilar air combat training (DACT) sorties against the Canadian Hornets based at Baden-Soellingen in the then West Germany.

In fact, the mock cockpit at first glance can cause doubt in the enemy’s mind that he wouldn’t be able to understand if the aircraft is turning toward him or away from him. “Some Eagle pilots mockingly suggested we should paint our aircraft like submarines: ‘Just think: That brief hesitation as he thinks What’s that submarine doing up there?’ may be all the advantage you need!” says the former F-15C pilot Robert “Scout” Winebrenner in Issue 23 “McDonnell Douglas F/A-18A/B/C/D Hornet” of Aviation Classics magazine.

Fighter jets with 'canopies' painted on the underside to confuse enemy aircraft during dogfights.

Winebrenner had the chance to see the Canadian Hornets in action while he was assigned to 32nd Tactical Fighter Squadron in Soesterberg, the Netherlands. During the same deployment, Winebrenner became a Tactical Leadership Programme (TLP) instructor and he flew a sortie in his F-15C together with a CF-18, flew by a Canadian Captain named Greg “Claw” Morris. As Scout recalls “After checking the applicable national regulations, we determined that it was not allowed to fly dissimilar close formation. But there were no prohibitions on dissimilar tactical formations. So we found the best weather on Low Fly Area (LFA) 7 in southern Germany and briefed up a low altitude VFR ingress through France at a slower speed to save fuel, intercepts on target of opportunity in LFA7, and a high altitude recovery to individual instrument approaches at Florennes.”

When they reached LFA7 several aircraft were already in the area and both the F-15C and the CF-18 flew several engagements against Neuburg Phantoms, Memmingen Tornados, and a couple of F-16s.

The two aircraft were very compatible and Scout and Claw worked together well, but Winebrenner noticed that everyone saw his F-15, while no one saw Claw’s CF-18. In the terminal phase of the intercept, invariably their intended victims would react and turn into the US F-15, looking for the ‘second Eagle’ – leaving Claw with more close-range belly Sidewinder shots than he probably cared to
take.

The same happened when two CF-18s pitched up and turned against Winebrenner’s Eagle, leaving Morris squarely behind them, but Claw quickly communicated to his buddies to check their six, as Scout recalls: “Hey, what are YOU doing back there? I’ m with the F-15! Fox 2 on both of you!”

Still today that mission remains one of the best flown by Winebrenner in LFA7, but the unique feature that makes him think about the Hornet is another one, as he explains: “After 26 years in the air force, I retired in 2005. Now my only exposure to the Hornet is watching the US Navy Blue Angels practice over my home in Pensacola. I did note disappointedly that they don’t have the fake canopy.”

Previous After 36 Year Of Service U.S. Navy’s Last F/A-18C Hornet Flew For The Very Last Time
Next A Day With The Only Female Thunderbird Pilot In The U.S. Air Force 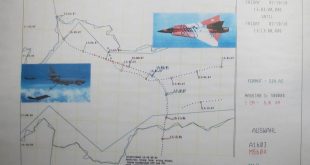