Bob Gilliland, the First Man to fly the iconic SR-71 Blackbird, Passes Away at the age of 93

On Jul. 4, 2019, Robert J. “Bob” Gilliland, former Lockheed test pilot and the first man to fly the iconic SR-71 Blackbird spy plane, died at the age of 93 at Rancho Mirage, California retirement facility where he had been living for several years.

The death was announced by his son, Robert Gilliland, Jr.

Bob Gilliland has more test flight hours at Mach 2 and 3 than any other pilot in the world. He has been recognized and honored for his work many times.

A native of Memphis, Tennessee, Gilliland graduated from the United States Naval Academy in 1949 and immediately joined the newly independent Air Force, serving as an F-84 fighter pilot in post-war Germany and during the Korean War. He was then selected after the war for the elite Air Force Research and Development team where he flew virtually every aircraft in the USAF inventory including “expanding the envelope” in the Lockheed F-104 Starfighter. As a Lockheed F-104 instructor pilot, Bob taught some of the world’s leading pilots how to fly the Starfighter.

Some of his students included WW2 Luftwaffe fighter aces Gunther Rall, and Johannes Steinhoff as well as Canada’s Wing Commander Kenneth Lett and USAF General John Dunning. Remarkably, Bob has made 5 successful “dead stick” landings in the F-104 – an amazing accomplishment given that the F-104 glides like a “toolbox” and is extremely unforgiving of pilot errors. Bob was also involved with fellow Lockheed test pilot Darryl Greenamyer in breaking the FAI world restricted altitude speed record of 988.26 mph in a highly modified F-104 on October 24, 1978. 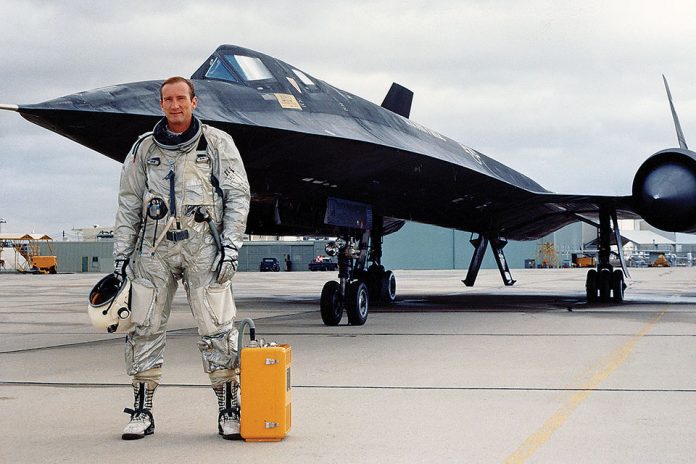 Gilliland was recruited to the Skunk Works in 1961, where he became a protégé of legendary aircraft designer Clarence L. “Kelly” Johnson. Working out of super-secret Area 51 in the Nevada desert, he began testing a revolutionary airplane capable of attaining speeds in excess of Mach 3.2 and climbing to 85,000 feet. This became the first plane in the Blackbird family, the A-12, designed for use by the Central Intelligence Agency under its covert Oxcart program.

When Johnson began designing the similar but more advanced SR-71 for the Air Force, he appointed Gilliland chief test pilot. Gilliland made the historic first flight on Dec. 22, 1964. 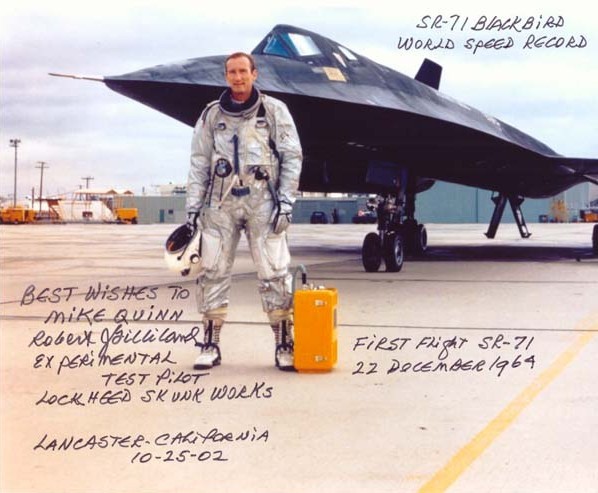 Recognized for his pioneering work in developing an aircraft that emerged as a potent intelligence-gathering weapon during the last quarter-century of the Cold War, Gilliland was inducted into the National Aviation Hall of Fame in 2017.

Bob Gilliland has logged more test flight hours at Mach 3 than any other pilot in the world. He has been recognized and honored for his work many times.

Bob Gilliland, a Fellow in the Society of Experimental Test Pilots, has received numerous awards and recognitions, among them the Ivan C. Kincheloe Award for his work on the Blackbird program.