Royal Canadian Air Force is looking to replace Canada’s aging fleet of fighter jets with new fighter jets. Four companies are vying for the multibillion-dollar contract for as many as 88 fighters that would replace the RCAF’s 1980s-vintage Hornets, which in Canadian service are designated “CF-18.” Attempts to replace 3-decade-old CF-18s began in 2010.

Saab, Airbus, Boeing and Lockheed Martin all are in the running, respectively offering the Gripen, Eurofighter, F/A-18E/F, and F-35A. The manufacturers will have until the end of 2019 to submit bids.

For its part, Boeing is striving to offer the Super Hornet Block III to Canada and support the government’s capability and industrial requirements, pointing that it continuing to invest in the Canadian economy.

Boeing has formally submitted its Block III F/A-18E/F Super Hornet to the Royal Canadian Air Force’s competition to select its next fighter jet.

The company also released the concept art of the configuration it is pitching to the Canadians, which shows aircraft equipped with conformal fuel tanks, carrying a podded infrared search and track sensor, and armed with an impressive 12 AIM-120 Advanced Medium-Range Air-to-Air Missiles and a pair of shorter-range AIM-9X Sidewinders. Lockheed Martin is also competing with its F-35 Joint Strike Fighter and Saab has submitted its Gripen E.

The Boeing press release doesn’t highlight any specific features of the Super Hornets that it is offering to the RCAF, but, as noted, the concept art shows jets with conformal fuel tanks (CFT).

The Super Hornet Block III offers Canada world-class, multi-mission capabilities and is uniquely suited for challenging operating environments. It offers predictable and affordable acquisition and life-cycle cost, which is critically important for a platform that will be in service for at least 30 years and is designed to stay ahead of future threats for decades to come.

The Super Hornet Block III, while fully meeting Canadian military requirements, is the minimum risk and maximum return on investment solution for Canada.

Boeing will be delivering Super Hornets to the U.S. Navy through at least 2033, while the development of next-generation Block III capabilities remains on schedule to deliver by the end of 2020. International interest remains high and includes Finland, Switzerland, India, and Germany, who recently down-selected the Super Hornet over the competition. 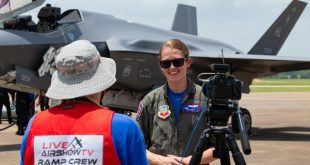