The walkaround starts with “Beo” talking about the EOTS (Electro-Optical Targeting System) with its T-FLIR (Targeting Forward-Looking Infra-Red), that provides, through the IR, a black and white display in the cockpit that shows hot things really dark, so that the pilot can see hot moving vehicles, buildings, people, etc.

There’s also a laser incorporated in the system, that allows to use LGBs (Laser Guided Bombs) like GBU-12s and GBU-49s on moving targets.

At 03:45 we get some details about the endurance of the aircraft that can fly 1.5 – 2 hour missions without Air-to-Air Refueling. Next is a look at the engine, capable of 40,000 lbs of thrust: “for the demo I typically take off at a reduced fuel load, so about 40,000 gross weight or less, so we are quickly to the 1:1 thrust to weight ratio that people talk about”.

At 06:00 we learn another interesting detail: F-16 travel pods are used by the F-35 demo team to carry all the things they need (from luggage, to backpacks to swag to be sold at airshows) and these travel pods fit, one in each weapons bay, inside the Lightning II, where the GBU-31, 2,000-lb bombs are attached.

At 08:00 we hear something interesting about the DAS, the Distributed Aperture System, a network of six cameras around the aircraft that provide 360 degree field of view to the pilot, giving him also the ability to see through the aircraft structure (and own body), thanks to the imagery projected onto the helmet’s visor. We have heard a lot about it, but I find it interesting to learn that it is “not used a ton tactically, although it’s a cool feature”.

We don’t get a chance to have a look into the cockpit, but we know it’s a glass cockpit that only has about 20 switches. Dealing with the helmet, features images, generated by two projectors and then displayed on the inner visor, that can include DAS imagery, flight critical info (like speed, direction and altitude), tactical info (like targets, friendly aircrafts, navigation waypoints) and night vision. Another value add of the helmet is the integrated NVGs (Night Vision Googles). Until today, during night operations US pilots had to choose between NVGs and JHMCS (Joint Helmet Mounted Cueing System) because NVGs need to be mounted a few centimetres in front of the eye and would interfere with the visor, leaving no space to project the symbology. 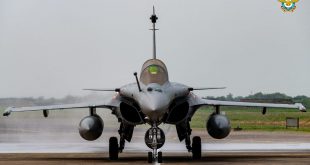 Credits: IAF The first batch of five French-made Rafale fighter jets has arrived at an …