The first batch of five French-made Rafale fighter jets has arrived at an Indian Air Force (IAF) base, Indian officials.

The aircraft had departed from Dassault Aviation’s Bordeaux-Mérignac facility in France two days prior and made the over 5,000-mile journey supported by French tanker aircraft, with a stop-off at Al Dhafra in the United Arab Emirates.

The delivery had been planned for May 2020, but it was slightly delayed by the ongoing COVID-19 pandemic.

The Rafales and their seven pilots were greeted by the Indian Air Force chief-of-staff, Air Chief Marshal RKS Bhadauria on July 29.

The Rafales are joining No. 17 Squadron “Golden Arrows” Squadron at Ambala. This is the first of at least two planned units that will fly the 36 Rafales that are currently on order as part of a €7.87-billion contract, or around $8.7 billion in U.S. dollars at the time, that was signed in 2016.

All 36 aircraft are expected to be delivered by 2022 and they will be equally split with No. 101 “Falcons” Squadron, which will be re-established as the second Indian Rafale unit, based at Hashimara Air Force Station.

The Rafale is a multi-role aircraft, capable of carrying out long-range missions, including highly accurate sea and ground attacks.

The defence deals come amid heightened tensions along the disputed frontier with China in Ladakh, where New Delhi has sent reinforcements of fighter jets and military equipment after hand-to-hand combat between Indian and Chinese soldiers on June 15 left 20 Indians dead.

Previous When U.S. Air Force Got Caught Trying To Sneak F-117s Stealth Fighter Through Austrian Airspace
Next Here The First-ever F-35A Lightning II Demonstration That Was Broadcast Live Around The World 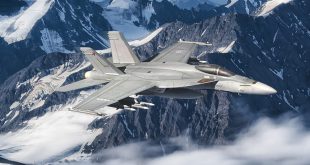