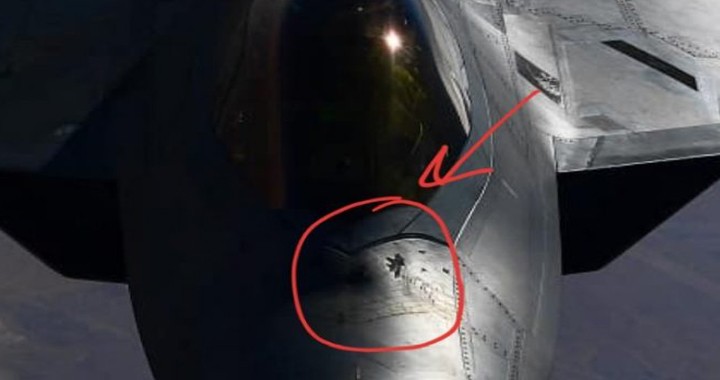 Several eagle-eyed Twitter users have spotted what they believed was severely eroded Radar-Absorbing Coating in front of the canopy of a U.S. Air Force (USAF) F-22 seen refueling over an “undisclosed location.”

As reported by Sputnik News, the U.S. Transportation Command (USTRANSCOM) published a video showing one of the 12 F-22s recently deployed to an airbase in Qatar being refuelled by a KC-135 Stratotanker, with no details made available about their position.

However, social media users quickly compared the terrain below the fighter in the photo to satellite images of an area of northwest Syria, seemingly indicating that the planes were flying northeast of Raqqa, a Syrian city controlled by the US’s Kurdish allies.

Furthermore, taking a closer look at the plane, users took note of what appears to be the “eroded” stealth coating on the F-22’s nose. “Yikes.” one user quipped. “Wtf,” another wrote, posting a detailed picture of the seemingly damaged area.

On August 1, 2019 we shared Shocking Images of F-22 Raptor Stealth Fighter Jets Losing Radar Absorbent Coating. The Drive contributor Tyler Rogoway shared these “fascinating” shots ,of the “crumbling radar absorbent skin” of a F-22 taking part in a recent air show in Wisconsin, with the plane said to have succumbed to corrosion, air friction ,and the extreme pressures which the plane has to endure in flight.

According to The Drive, the maintenance costs of the plane’s stealth coating contribute greatly to the $60,000 per hour price tag of the F-22’s deployment.

It’s unknown what impact the cracked coating has on the plane’s stealth capabilities, although the pictured F-22 shown off by the Transcom was unlikely to be operating in stealth mode while interacting with the tanker.

Indeed the F-22’s radar-absorbing coating experienced the first problems in 2009, when Raptor pilots complained that the coating easily erased from F-22’s body during contact with fuel and lubricating oil.

However Lockheed Martin said that has developed a new, more resistant coating which will be applied to all F-22s during maintenance operations. The process should start this year.

Nevertheless cracked coating should not compromise the plane’s stealth capabilities as a source close to the F-22 Raptor program, who wishes to remain anonymous.

F-22s are known to have been deployed in Syria on at least one previous occasion, with the US Air Force Central Command revealing that F-22s had played “an integral role” in the 14 April 2018 airstrikes against Syria, in which the US, the UK and France fired over 100 sea and air-launched cruise missiles at the country. The Russian military later reported that 70 percent of the missiles were shot down by Syria’s mostly Soviet-era air defences.