The Nighthawk 85-0833 is the second-highest combat mission plane in the F-117A fleet.

Ehe Stealth Jet entered the ramp from the airport to the Museum towed by a ground vehicle and was greeted by a flyby salute from two pivotal Lockheed aircraft (the WWII vintage P-38 Lightning and a first-generation T-33 Shooting Star jet) along with a water arch tribute and a final radio call from the control tower that recognized its 20-year service in the U.S. Air Force.

The aircraft was prepared for its transfer to the PSAM by the DeMil Team at Tonopah Nevada and after delivery, it went into restoration for many months before its exhibition at the museum. Although the aircraft won’t be in regular display until Spring 2021, PSAM has already launched a series of 6 limited events for the public to view the F-117 aircraft up close and personal with an experienced interpreter as a guide. 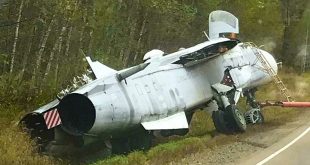